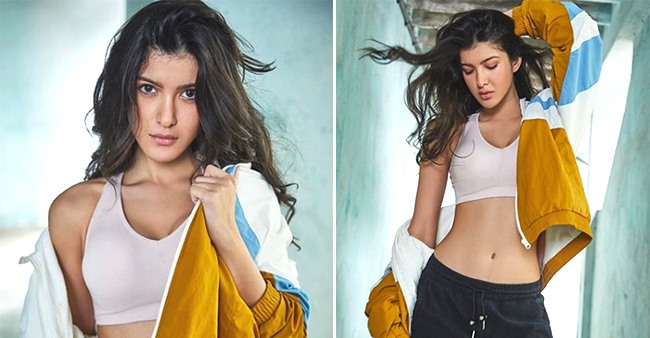 Of late, Bollywood star Sanjay Kapoor has shared some splendid pictures of his loving daughter Shanaya Kapoor on his personal Insta handle. The pics are a real treat for the fans and they all are in awe of images. In the images, the cute Shanaya can be seen showcasing her washboard abs. In the pics, Shanaya can be seen wearing a white sports bra, black track pants and an oversized color-block jacket.

The post made by the actor bagged thousands of likes within a few minutes. Among them were Bhavana Pandey, Seema Khan and a number of Instagram users who praised the upcoming actress. One netizen wrote, ”Oh my goodness!!! I just can’t take eyes off her”. Another wrote, ”Next Bollywood sensation”. Several fans and web users commented using heart and fire emojis in the comments box.

Like her dad, Shanaya always wishes to work in the film industry. Presently, she is working as an assistant director to Sharan Sharma on Gunjan Saxena: The Kargil Girl, which has Janhvi Kapoor in the key role of the former Indian Air Force pilot.

Happy Woman’s Day & more power to all of you . #HereIsToTheStrongWomenInMyLife ❤️❤️

Previously, Shanaya, during a media talk, stated that it was her biggest dream to get launched in the Hindi film industry by ace personality Karan Johar. ”I mean, yeah! I don’t think any actor would say no. He is family. He is talented and the most amazing director. I think I would start crying if Karan ever directs me. I would get emotional and just die”, she said.

She also disclosed that her mom and dad advised her to join a film school to learn some basics of acting before joining the industry. But, Shanaya said that she is of the view that working on the sets will help learn the acting as well as movie making in a much better way than formal education.

The star kid also stated that assistant director was the ‘greatest experience’ of her life. On this, she said, ”After being an assistant director, I realised how much work goes into making a film. I learnt so much about camera lenses, close-up shots, how you get into the character, how you shoot an angry scene, what are the things that actors do on set. All this just made me more confident of what I wanted to do.”

Gunjan Saxena: The Kargil Girl is proposed to hit theaters on April 24 but the release date might be postponed owing to the coronavirus outburst.