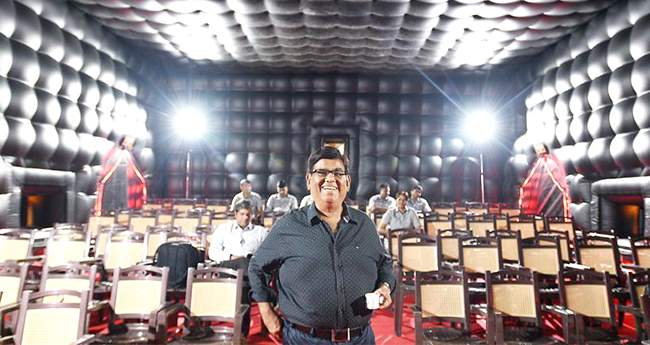 The total sum that Bollywood earns is an evidence enough of our keenness towards the flicks. Bollywood is stated to be the largest in the world, with around 1000 movies being made on an annual basis.

For most ardent film buffs, Fridays are holy, which they enjoy with biggies, cold drinks, and popcorn.

We keep a hold of to every statement they make and trust every endorsement they create.

The people living in big towns and well-known places have easy access to flicks, but the people residing in villages do not enjoy these special moments. This aloofness could be one of the major causes why Bollywood loses lots of money to piracy. fondly remembered for his iconic role as ‘Calender’ in Mr. India

With the aim to make film-watching accessible for one and all and also assist in controlling the piracy matters, well known Bollywood personality Satish Kaushik is rolling out Mobile Digital Movie Theatre (MDMT). These Mobile Digital Movie Theatre are air-conditioned, flameproof, and heavy-duty. To watch a movie inside this mobile theatre, the person needs to spend between Rs 35 to Rs 75.

The new project is supported by the founder of Picture Time, Sushil Chaudhary. Picture Time is a company, which runs these mobile theatres. The publication further reported, “This is a revolutionary concept and can fulfil the aspirations of people in small towns. There is a shortage of movie theatres in the country as compared to USA and China. According to an estimate, there are around 2,200 multiplexes in India for a population of around 1.3 billion people, which is far below the density in developed countries.”

“The target group of this theatre is people who live in places were cinemas fail to reach,” added Kaushik.

“This moving cinema will be a good platform (for all of them),” he also said, adding that the moving theater’s live-streaming capability turns it highly adaptable.