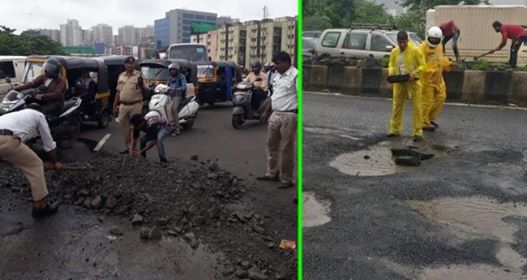 Rain in different areas of the country has tensed people and have also increased work for our brave police. Sadly, the Mumbai police had to do work of other authorities too so that people don’t face difficulties on road and accidents can be avoided. Mumbai Traffic has never failed to amuse us with their exceptional tweets on road safety and exceptional work. Recently, there were traffic jams due to the dismal state of the busy Sion-Panvel Highway so the Navi Mumbai traffic department took the matter into their own hands on Saturday and filled up potholes along a one-km stretch of the highway.

An assistant police inspector from Kharghar traffic unit, Pravin Pandey, said on Saturday morning that they decided to do something about it after traffic remained blocked for over three hours near Kharghar. “Looking at the bumper to bumper traffic in the morning hours, we summoned our personnel to fill the potholes along the crater-filled patch between Kharghar and Kopra. The line of vehicles stretched up to CBD bridge. Since PWD workers were busy in fixing the potholes, additional support was provided by our personnel to clear traffic,” said Pravin Pandey told Times of India. Upon learning that the traffic police were fixing the potholes, officials from the public works department reached the spot with rollers and started repairs on that stretch of the road. However, their progress was interrupted due to heavy rain. Requesting anonymity, a PWD official told Hindustan Times, “We are repairing the road in parts. We will continue with the work until the monsoon is over. We have ensured that our officials are doing quality work.” Executive Engineer, PWD, Kishore Patil said, “Rain has played spoilsport over the last few days. Our men are at work along the stretch.” Deepak Singh, an activist, was quoted by Times of India as saying, “This road was repaired on war-footing during the last October FIFA World Cup event to show the world that PWD is prompt in maintaining smooth roads which fell flat with a few spells of rain.”

We all appreciate the selfless gesture of Mumbai Police and making the authorities realise their duties.