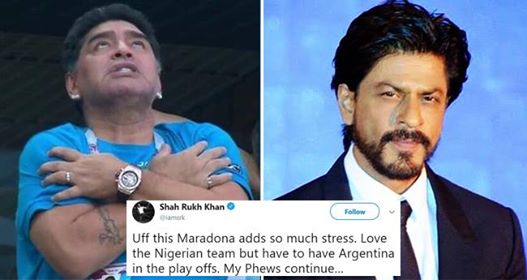 Cricket is widely popular in India. In fact, cricket matches are celebrated as festivals in India. Indian Premier League enjoys millions of viewers every year. A sport like Football was not given much importance in the country but now the things have changed. Football is slowly emerging as one of the popular sport in India after the Cricket. The FIFA Worldcup fever is currently high all over the world including in India.

A film never finishes…but so many beautiful things come to an end around it. Thanks everyone for a very fruitful & hectic shoot. #ZeroTheFilm

In a recent match between Argentina and Nigeria, Lionel Messi may have dominated the on-field action in Saint Petersburg, but from his VIP box in the stands, Maradona became the main centre of attention with his expressions and actions.

Like many others, Bollywood superstar Shah Rukh Khan was on the edge of his seat as he cheered for Argentina.

Uff this Maradona adds so much stress. Love the Nigerian team but have to have Argentina in the play offs. My Phews continue…

Shah Rukh took to Twitter and wrote, “Uff this Maradona adds so much stress. Love the Nigerian team but have to have Argentina in the play offs. My Phews continue…”. This is not the first time that King Khan had an adrenaline rush while watching a game of football. Earlier too, he has mentioned on his Twitter handle how his favourite teams are testing his blood pressure. “My favourite teams are testing my blood pressure. Double phew Germany!!!,” read one of his tweets.

Maradona’s animated celebrations attracted a lot of reactions on Twitter. Some even called him “possessed”.

When Messi gave Argentina the lead early in the first half, Maradona screamed his delight, crossing his hands across his chest and gazing to the heavens.

After Nigeria made it 1-1 from the penalty spot after the break, Maradona grew increasingly distraught. By the 80th minute, he sat with his hands covering his face, unable to watch as the seconds ticked towards a footballing calamity for Argentina.

Diego Maradona has been possessed…….by the spirit of Pablo Escobar. pic.twitter.com/fqFLCXIfEN

However, later images emerged on social media of Maradona walking with difficulty and being guided into the dining room of the VIP section by two friends. Other photographs showed two uniformed paramedics attending to him, with one appearing to take his pulse. Argentina media reported that Maradona had suffered a spike in his blood pressure.