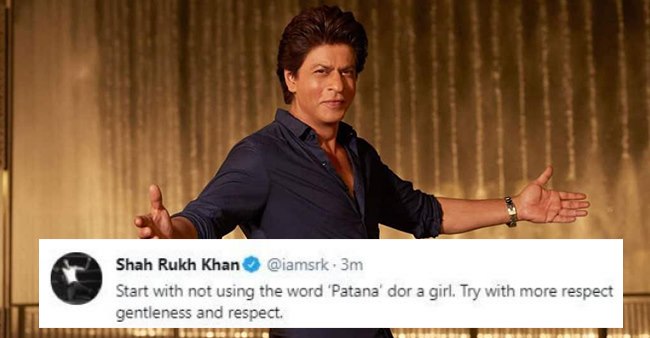 Undoubtedly, Bollywood actor Shah Rukh Khan is among the charming heroes of the Hindi film industry. He is admired by his fans for the effortless acting and how his eyes do all the work. King Khan has starred in numerous movies of different genres and also has essayed several characters on the silver screen. However, no one can take away the title of ‘King of Romance’ from him and he proves it time and again.

Recently, Shah Rukh Khan conducted an ‘Ask Me Anything’ (AMA) session on his social media handle. During this session, he invited millions of his fans and followers to send in questions for him. It isn’t the first time that the superstar of Bollywood has found an opportunity to interact with his fans. He has done it ample of times before and his responses are always witty and hilarious.

During the AMA session, a fan asked Shah Rukh Khan some tips to ‘woo a girl’. The fan’s question read, “Shah Rukh Khan ladaki patane ke liye ek do tips do (sic)”, he accompanied it with the hashtag ‘Ask SRK’.

The DDLJ actor schooled the fans with a witty response and the netizens are amazed. Shah Rukh Khan’s reply read, “Start with not using the word ‘Patana’ for a girl. Try with more respect gentleness and respect (sic).”

Start with not using the word ‘Patana’ dor a girl. Try with more respect gentleness and respect. https://t.co/z1aJ0idK0t

Actor Shah Rukh Khan is among the respected actors of the industry. He is also admired by everyone for being a gentleman. The 55-year-old actor has been married to the love of his life Gauri Khan. The duo has been together for the past 29 years.

The husband-wife duo is doting parents to three kids- Aryan Khan, Suhana Khan, and the youngest of the clan AbRam Khan.

On the work front, Shah Rukh Khan is gearing up to make a comeback on the big screen with Pathan. The Siddharth Anand helmed movie also stars Deepika Padukone in the lead role.

It will be SRK’s first movie ever since he took a break in 2018 after his movie Zero failed at the box office.

Published by siddhi ajgoankar on 01 Apr 2021

Check Out Doppelgangers With Striking Resemblance With Celebs Like Ajay, Big B & Others...

Bollywood Singers Like Atif, Shaan & Others Have Gorgeous Wives...