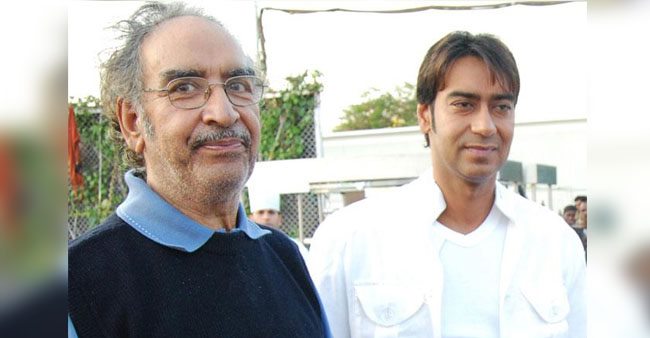 aThe 85 year old ace action choreographer Veeru Devgan reported breathing problem on Monday after which the action director was shifted to Surya Hospital, Santa Cruz without any delay. At the hospital, his health became serious and he had a cardiac arrest.

In one of his interviews, Ajay Devgn called dad the “true Singham.” He is acknowledged for his matchless work in flicks such as Mr. India, Hindustan Ki Kasam, Roop Ki Rani Choron Ka Raja and Shahenshah, amongst many others.

The well known stunt director has directed action series in almost 80 Bollywood flicks, with his key work during the 90s.

Hindustan Ki Kasam was his only movie which he produced and directed.  As the country grieves for Veeru Devgan’s demise, here’s a look at a few of his top notch work –

One of the most unforgettable flicks of all times, the movie became the highest grosser and super hit due to the matchless acting of late actress Sridevi and super star Anil Kapoor. Veeru Devgan was the stunt choreographer in the movie.

Shahenshah, an additional magnum opus of Indian movies! Veeru Devgan acted as a stunt director in thesuper hit flick, which has Amitabh Bachchan, Amrish Puri, Supriya Pathak, amongst others.

Devgan helmed a range of action sequences in Ajay Devgn starrer Dilwale. The movie turned the hightest grosser of 1994 and bagged several awards.

He also looked after the action series for other flicks featuring Ajay comprising Jaan, Diljale, Jigar, and Ishq.

His last movie as a stunt director was the 1999 film Gair.