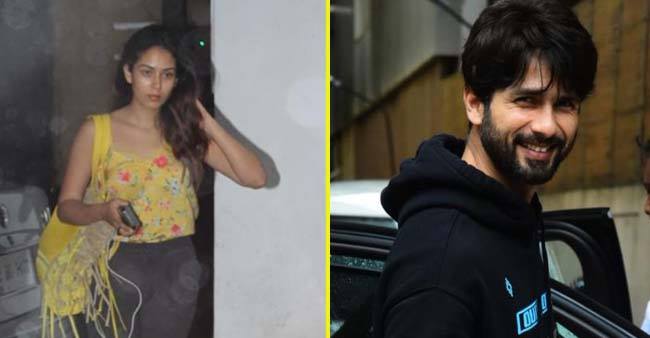 Kabir Singh actor Shahid Kapoor and Mira Rajput are a power couple in Bollywood.  They are a super hit Jodi in the B-town that has a huge fan base.  They always set couple goals for their fans and this new couple goal is something you shouldn’t miss reading.  Shahid and Mira have this habit of hitting the gym together.  They often were spotted outside the gym in gym outfits together.  They also go for dinner dates on weekends to spend that special kind of quality time with each other.

In the same scenario, the couple left for a weekend outing and were snapped by the paps.  The couple literally took away all the attention of the paps with their casual look.  Mira was snapped outside a clinic in her casual look while Shahid was snapped outside the gym.  In the photos, Mira is seen wearing a yellow floral top and back pants whereas Shahid wore a black sweatshirt and shorts.  In the pictures, Mira was seen smiling to the cameras while Shahid was seen in his usual ever-smiling avatar before heading back home.

Shahid and Mira snapped in the city

Shahid is currently enjoying the huge success of his recent release Kabir Singh.  One can see a big 2 inch smile on the face of the actor whenever and wherever he is being clicked.  The movie has done a big market at the box office breaking many records set by the actor himself in the past.  The movie so far has collected 275 crores at the box office.  The movie is directed by Sandeep Vanga and stars Shahid Kapoor and Kiara Advani in lead roles.

When the film crossed 200 crores at the box office, Shahid Kapoor took to social media to jot an emotional note thanking everyone for the love.  He wrote that, “one of his most flawed characters has become one of the most loved.”  Recently, in an interview, the actor said that Mira was the one who convinced him to do Kabir Singh as she said that such a film needs to be part of his filmography.