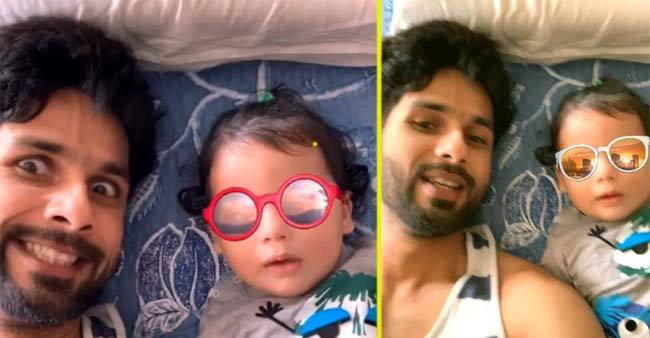 Mira Rajput, wife of actor Shahid Kapoor gave birth to her second child who is a baby boy last year in August. The couple named their son Zain Kapoor. Shahid and Mira often posts the picture of their baby girl Misha Kapoor on social media but they rarely share the glimpse of their son Zain Kapoor. The mommy dear by sharing one picture of her son made him crush of fans just like Kareena Kapoor Khan and Saif Ali Khan’s son Taimur Ali Khan.

And now, Shahid shares another adorable video of little Zain Kapoor. In the video, little munchkin of Kapoors is seen in cool shades. Shahid used the sunglasses filter in the video and keeps switching it between him and Zain. Zain was looking surprised to see himself in the cool look.

Shahid earlier announced after the birth of the baby that he and Mira felt “complete” after the new addition to the Kapoor family. “Zain Kapoor is here and we feel complete. Thank you for all the wishes and blessings. We are overjoyed and so grateful. Love to all,” he wrote on social media Twitter.

In September, daddy of Zain announced the name of the baby boy Zain Kapoor with an heart-touching post: “Zain Kapoor is here and we feel complete. Thank you for all the wishes and blessings. We are overjoyed and so grateful. Love to all.”

Cause she knows she can do it all better.

Shahid and Mira are also parents to two-year-old Misha and they tied the knot in 2015. Talking about his wife in an interview, he had said, “I got lucky. I married Mira,” Shahid added, “She’s as normal as it gets. We kind of hit it off and decided to get into an arranged marriage. By God’s grace it’s been wonderful, the last three years, and she’s been a huge part of that for me.”

Talking about the professional front, Shahid has wrapped up the shooting for Kabir Singh. The teaser of which has also released. It is a Hindi remake of the South Indian film Arjun Reddy. The film also stars Kiara Advani and Suresh Oberoi in it. The film is slated to hit the theatres in June 2019.