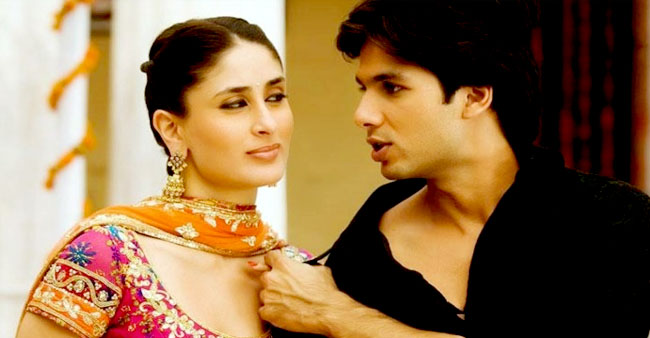 One upon a time, Shahid Kapoor and Kareena Kapoor were the IT couple of tinsel town. They were head over heels in love with each other and people even thought that they will take the next step in their relationship. In 2007, they even shared the screen space with each other in Imtiaz Ali directed Jab We Met.

The movie starring Shahid Kapoor and Kareena Kapoor was a super hit and everyone was mesmerized by the reel-life story of the duo. However, hearsay suggests that the two had broken up way before the release of the movie. The reason for their split isn’t known yet but the news surely broke many hearts.

Post their breakup, neither Shahid nor Kareena ever openly addressed the breakup except for the fact that it allegedly happened during the filming of Jab We Met.

A few years back, Shahid Kapoor was asked about romancing Kareena Kapoor on the big screen again. In response to the question, the actor said, “I would like to work with her again.”

Furthermore, Shahid added that he feels like an actor if a producer wants him to romance a cow or buffalo also, he will do it as it is his job.

Shahid Kapoor and Kareena Kapoor have starred in three films together including Chup Chup Ke, Fida which flopped at the Box Office, only Jab We Met was a blockbuster hit. It is sad to know that their romance fizzled out while filming the romantic comedy.

Earlier, even Kareena Kapoor had openly spoken about how Jab We Met and the break-up impacted her life. She said that it was Shahid who asked her to read the script of the movie, and he told him that it has an amazing girl’s part and she should do it.

Concluding her statement, the gorgeous diva said, “He kind of actually got this entire project together and both of us ended up doing this film.”

Speaking of the impact of the break-up, Kareena said that destiny had other plans and life took town course. She confessed that a lot happened during the filming of this movie and Tashan. Then they went their separate ways and the beauty of the movie Jab We Met came out.

Kareena Kapoor and her now-husband Saif Ali Khan bonded on the sets of Tashan and they set on forever.

Meanwhile, both Shahid Kapoor and Kareena Kapoor are happy in their respective lives. They are happily married and are blessed with two kids each.

The love story between Shahid and Kareena is now a part of history but it goes down as one of the sweetest stories of the tinsel town.