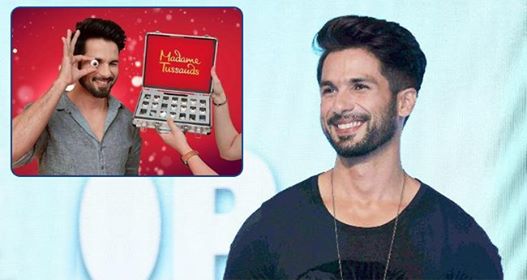 Bollywood industry is becoming popular all over the world. Every other day we hear news of Bollywood celebs having their statue at Madame Tussauds.

Yesterday, Leela aka Deepika Padukone went on Facebook live to announce the achievement of getting a wax statue at Madame Tussauds in London. Now, her Padmaavat co-star Shahid Kapor is the next one in line to get his statue at Madame Tussauds. He is the next Bollywood star to achieve this great thing. He announced this news on the Instagram account by posting the picture of holding an eyeball for a measurement and captioned it, “Keep an eye out. Coming soon.”

However, he did not mention that in which Madame Tussauds he will get his wax statue.

Check out the image which Shahid posted:

Keep an eye out. Coming soon.

Deepika Padukone took off to London and even posted a picture of her shenanigans.

Here is her picture before flying for London:

The picture below was posted by Deepika yesterday. She is seen giving her measurements at Madame Tussauds.

Check out the image below:

It’s all about the details 🤔😁

This is really a very big achievement for Shahid, who entered the Rs 300 crore club with Padmaavat.

Shahid Kapoor played the character of Rajput warrior Maharawal Ratan Singh and he won praises for his extraordinary performance.

On the work front, Shahid will be next seen in Batti Gul Meter Chalu, which is directed by Shree Narayan Singh, who previously helmed Akshay Kumar and Bhumi Pednekar starrer Toilet: Ek Prem Katha. It was a successful venture at the box office. Batti Gul Meter Chalu is a social satire and also stars Shraddha Kapoor and Yami Gautam in pivotal roles.

This movie will clash with Manmarziyan. The film will hit the screens on September 21 and it stars Abhishek Bachchan, Vicky Kaushal and Taapsee Pannu.

After this, he will start shooting for Arjun Reddy, which is the official remake of Telugu blockbuster of the same name.