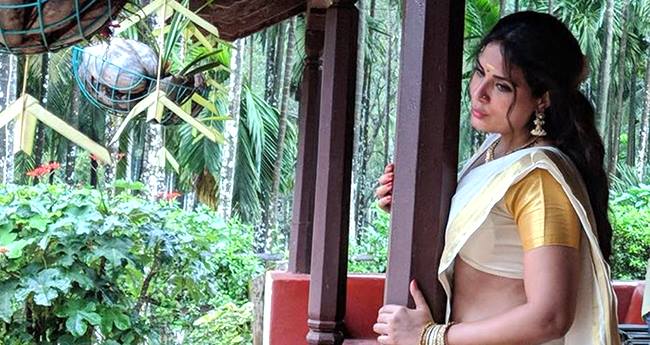 Richa Chadha is one of the best actresses of Bollywood who has always left us awestruck with her terrific acting skills. The actress has always experimented with her roles and proved her mettle in acting.

The actress will be next seen in the biopic of Shakeela. The first look of the film is out and Richa has left us stunned. The actress is seen in a refreshing avatar in a Kerala sari Kasavu Pattu. With traditional and authentic South Indian look, Richa looks every bit beautiful and we love the way she has presented herself.

Talking about the actress Shakeela on whom the biopic is made, she was an actress who has worked in Malayalam, Tamil, Telugu and Kannada language films since over two decades. The film will witness the controversial and glamorous life of the actress which will be presented in a great manner on the celluloid.

Richa who plays the titular role in the biopic has started shooting in a small town in Karnataka called Tirthahalli.

Talking about her look in the film, the Sarbjit actress said, “The challenge for the look of the film but also a good one is that the story traces the journey of Shakeela’s younger days to her becoming a popular figure.”

She further added, “So, the looks span over years and years and with each passing time her look changed. To show that is challenging but also for me as an actor, it’s gratifying that I get to grow with the real character on celluloid. Shakeela is still a legend and we wish to do complete justice to her when the film is ready.”

The film is being directed by Indrajit Lankesh.

On the work front, Richa has been a part of some successful films like Sarbjit, Fukrey, Fukrey Returns, Goliyon Ki Raasleela – Ram Leela, Gangs of Wasseypur 1 and 2, Masaan, 3 Storeys, Oye Lucky Lucky Oye!

The actress was last seen in the flick Daas Dev which also starred Aditi Rao Hydari.

So folks, what do you have to say about Richa’s look? Tell us in comments.