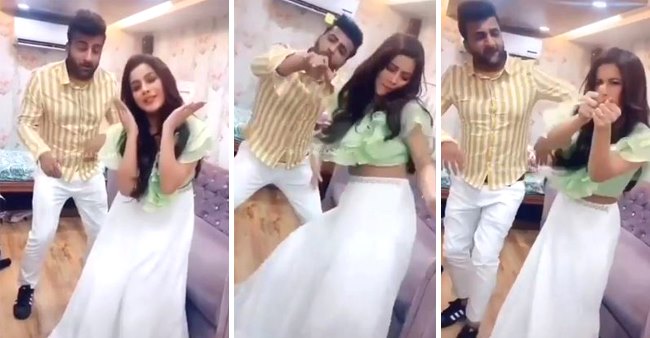 Bigg Boss 13 ex-contestant Shehnaaz Gill has become quite famous. With her trending show Mujhse Shaadi Karoge, she is all over the internet. She has been grabbing everybody’s attention, thus becoming one of the favorite stars of the internet. She is also called as the Punjab ki Katrina Kaif. All this is because of the goofy and funny antics of hers. Along with her, Paras Chhabra is also a part of the show Mujhse Shaadi Karoge. This show is a Swayamvar where Paras and Shehnaaz are looking for their partners. Though the show is not doing very well on the TRP charts, it is very well doing on Twitter’s top list.

While filming for the show, Shehnaaz Gill in the short breaks made some interesting dancing videos with her brother Shehbaz. They were seen dancing on the song Dheeme Dheeme which has gone viral over the internet. This video was shared by a famous fan page of Shehnaaz Gill. She was looking very pretty as she wore a white palazzo with a pistachio color top.

On the work front, Shehnaaz Gill will be seen in a video song opposite Sidharth Shukla. The first look of the video was released today and their fans have gone crazy. Sidharth shared the first look on his Instagram account and captioned it saying, “Are you ready to witness #SidNaaz‘s undeniable chemistry in @darshanravaldz love ballad ‘BHULA DUNGA’? Coming soon! Stay tuned!!” While Punjab ki Katrina wrote, “#SidNaaz is back! BHULA DUNGA”

According to some reports, the show is kept on hold for some time. It is said that the contestants are packing their bags right now and are going back home. The show was supposed to go off-air on March 27 but now it will most certainly be delayed.