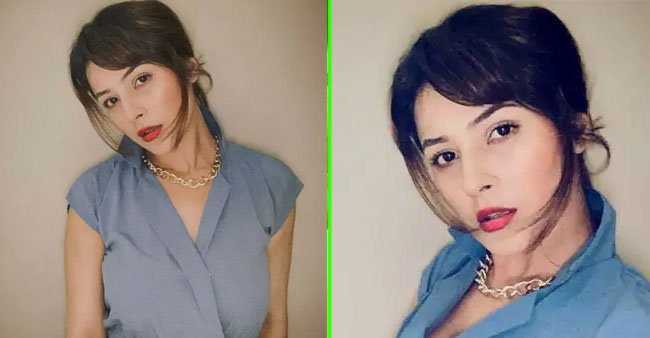 Published by siddhi ajgoankar on 14 Apr 2021

Punjabi star Shehnaaz Gill became the talk of the town ever since her appearance on the TV reality show Bigg Boss. She appeared on season 13 of the Salman Khan-hosted show and garnered herself a nationwide fan following. Her following on social media handles also increased rapidly post her stint on the show.

Shehnaaz Gill is quite active on her social media handles and blesses the timeline of her fans with some jaw-dropping pictures. She even shares some dance videos or funny videos on her Instagram handle.

A few days back, Shehnaaz Gill got herself a new haircut and she is not missing any chance to show it off. Recently, the former Bigg Boss contestant has shared a series of photos from her photo sessions.

The pictures prove why Shehnaaz is considered to be one of the queens on social media. In the picture, she is wearing a loose grey-coloured shirt and has acessorised it with a golden chain around her neck. Her makeup is on point and her hair tied up with red lipstick adding sparkle to her glowing face.

Not many people sport bangs really well but Shehnaaz is clearly looking stunning in her new hairdo. The pictures have garnered a lot of likes and the netizens are gushing in the comment section.

Shehnaaz Gill recently wrapped up the filming of her upcoming venture Honsla Rakh. She even shared a glimpse of the wrap-up party on her Instagram. In the movie, she is going to share the screen space with Diljit Dosanjh who also is one of the producers.

Apart from Diljit and Shehnaaz, the movie also stars Sonam Bajwa and Gippy Grewal’s son in pivotal roles. The movie is scheduled to hit the big screen on October 15, 2021.

All of the Punjabi star’s fans are really excited to see her perform on the big screen and they are hoping to see her star in more projects.