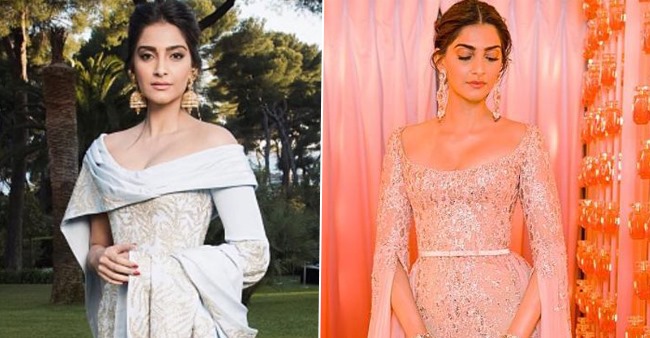 Bhaag Milkha Bhaag actress never fails to make an impression on her buffs with her has super special style. And no other actress hits the red carpet like the cute face actress does.

Whilst the actress and her stylist-film maker sister Rhea Kapoor have transformed fashion standards and its various facets in the country, Mrs. Ahuja has also made sure to pass on Indian cultural constituents to the forefront. And the majority of it, she’s practiced at the high-status Cannes Film Festival.

Whilst the curled beauty Kangana has made her very first appearance in a Falguni Shane Peacock traditional sari and dimpled beauty Deepika Padukone has impressed one and all in a custom Dundas dress in cream and black at the high-status Cannes Film Festival, admirers are awaiting their favorite Sonam to shine at the red carpet.

From henna, haath phool to jhumkas, parandi and half sari and lehengas, the actress has experimented all the elements.

Simplicity and stylishness will be the main concentration of Sonam’s look at the 72nd Cannes Film Festival’s red carpet. This declaration has been made by sister Rhea Kapoor.

Rhea told media people, “I think this year we are going to focus on simplicity and elegance… It will be more on Sonam’s personality and where she is in her life right now. See, this is a very beautiful phase of her life where she is very happy, content and emotionally secure. So, it should come across in the clothes and the looks.”

On the film front, Sonam was last seen in Ek Ladki Ko Dekha Toh Aisa Laga and she will next star in The Zoya Factor. Directed by Abhishek Sharma, the film co-stars Dulquer Salmaan in a key role and is slated to release on June 14, 2019. Produced by Pooja Shetty Deora and Aarti Shetty, the film is an adaptation of Anuja Chauhan’s novel of the same name.