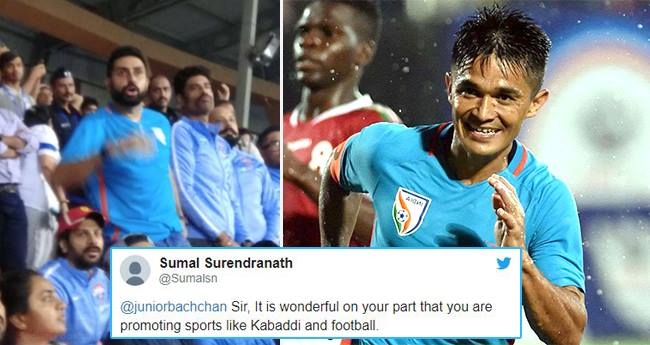 Junior Bachchan is often spotted promoting sports other than cricket. Recently India won the second football match against Kenya in the ‘Intercontinental Cup’ held in Mumbai. Footballer ‘Sunil Chhetri’ has become a star and is also appreciated for inviting football lovers via social media to watch the matches. Though many celebrities praised the game on social media no one actually went to watch the match except ‘Abhishek Bachchan’.

Abhishek was spotted cheering for the Indian football team in the crowd. Fans appreciated him for watching and supporting this game. Along with Abhishek, former footballers ‘Bhaichung Bhutia’ and ‘I.M. Vijayan’, AIFF president Praful Patel also came in support of this game.

Abhishek Bachchan is a supporter of Football and Kabaddi and has also brought teams of these sports. On India’s win in the football match, Abhishek posted “And you know he had to score!!! @chetri_sunil11  captain, leader, legend. Great win by team India 3:0 Kenya. Super brace by the captain and an unbeatable goal by the sniper @jejefanai who kept his promise to me that he’d score #backtheblue”.

And you know he had to score!!! @chetri_sunil11 captain, leader, legend. Great win by team India 3:0 Kenya. Super brace by the captain and an unbeatable goal by the sniper @jejefanai who kept his promise to me that he'd score. #backtheblue Onto the next one boys. 🇮🇳

Bollywood stars coming in support of sports other than cricket will definitely help to promote these underrated sports in the country. Arjun Kapoor, Varun Dhawan, Boman Irani and Karanvir Bohra also praised the Indian football team on social media. See what fans have to say on Abhishek Bachchan cheering the football team-

@juniorbachchan you won our heart by standing there I'm the stands supporting team india.We indian football fans will also stand by your side no matter what anyone say about you. Lota of love #gurubhai pic.twitter.com/rnOopnvDh9

@juniorbachchan Sir, It is wonderful on your part that you are promoting sports like Kabaddi and football.

Many celebrities were tweeted many come with his or her videos but only you came to the stadium to support our indian football team that's the spark to support .. grand salute to you @juniorbachchan

Due to low attendance of the audience, Sunil Chhetri uploaded a video requesting the Indian citizens to come and watch the matches. As a result of which many celebrities and sportsperson came forward in promoting this tournament on social media.

This is nothing but a small plea from me to you. Take out a little time and give me a listen. pic.twitter.com/fcOA3qPH8i

The Intercontinental Cup 2018 is a 4 team association football tournament which is taking place in Mumbai. India, Kenya, Chinese Taipei and New Zealand are the four countries participating in this tournament. The final match will be played on 10th of June in Mumbai.