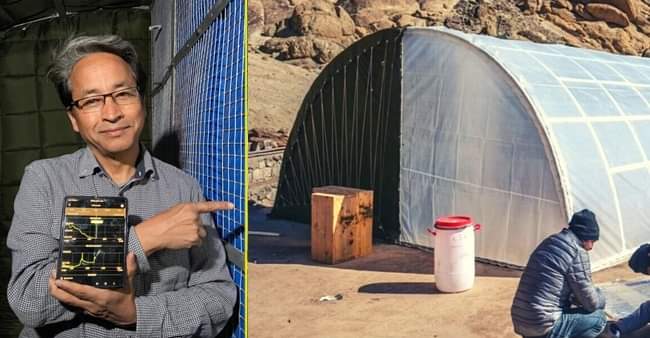 Sonam Wanghchuk, the man behind the character of ‘Phunsukh Wangdu’ in the Bollywood blockbuster ‘3 Idiots’, has found a solution to keep the Army jawans stationed in the Ladakh region warm. Well, he has created a solar-powered handy military tent for the soldiers that could include 10 jawans at a time.

The weight of the tent he claimed is less than 30 kilos. On Friday, Wangchuck shared the images of a solar-powered military tent, which he claims can keep them warm at 15 degrees even when it is -14 degrees outside. He further said that the solar heated military tents can be used by 10 Indian Army jawans at a time and is completely portable.

Wangchuck’s latest innovation has left many impressed. “Sonam, you’re the MAN! I salute you. Your work is energising, even this late in the evening,” Anand Mahindra said in a tweet.

Wangchuck, the creator of Student the educational and Cultural Movement in Ladakh was established in 1988 by a group of students. The whole institute is designed with solar energy and uses no fossil fuel for cooking lighting or heating.

He has moreover appeared with a great way of providing fresh water to villages in the upper reaches of Ladakh that were in the biggest crisis. His sources of water are the nearby streams and he also uses his artificial glaciers that would stock freshwater for the community and that comes very handy in the springtime.

He has said, “There have been others before who have worked in this field but encountered problems such as premature melting. To address these problems, we have built vertical ice towers using a simple method.”

Unseen Picture of Big B With Jr Bachchan States That He Is The Best Dad...

Stars Like SRK, Saqib & Others Played Sports In A Professional Manner...

After Knowing About Her Pregnancy, Bebo Asked Veere Di Wedding Producer To Replace Her...

Model Dinesh Mohan On His Weight Loss Journey: Something Extraordinary Can Always Happen In Our Ordinary Lives...