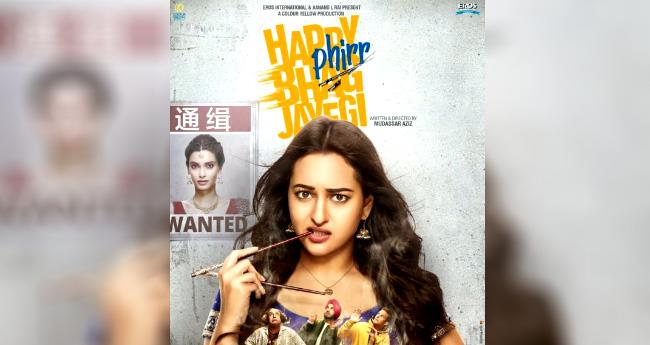 Happy Phirr Bhag Jayegi is a sequel to Diana Penty starer movie Happy Bhag Jayegi. Dabangg Girl, Sonakshi Sinha joined the star cast of the movie as we came across the first poster of  Happy Phirr Bhag Jayegi. In the poster, while Diana is seen on the WANTED list and Sonakshi seems all confused while holding chopsticks and the other stars Piyush Mishra, Jimmy Sheirgill and Jassie Gill are seen inside a cane box.

The last movie did well on the box office with an average audience review. The sequel of the movie is directed by Mudassar Aziz and presented by Eros International and Aanand L Rai’s Colour Yellow Production is co-produced by Aanand L Rai and Krishika Lulla.

Talking about the film, Sunil Lulla of Eros International stated to Leading media, “Like its predecessor, Happy Phirr Bhag Jayegi will hugely entertain audiences with twice the madness and fun.”

While Aanand said, “It’s a cheerful extension of Happy Bhag Jayegi and we hope the audience will enjoy this film as much as we did making it.” Aziz added, “Humbled by all the love that people gave Happy Bhag Jayegi, this is my attempt to return that by way of entertaining them!”

Have a look at some of the sneak peek videos from the movie:

Talking about the lead role Diana Penty, she was last seen in Parmanu: The Story Of Pokhran alongside John Abraham. The movie won the hearts of many and garnered with positive reviews from the audience and critics alike. Diana has done a variety of roles in her journey of Bollywood.

Meanwhile, Sonakshi Sinha recently did Dabangg Tour with Salman Khan, Katrina Kaif and Jacqueline Fernandez and performed all around the world.