Sonam Kapoor: Nobody Has Asked Anand Who Also Changed His Name 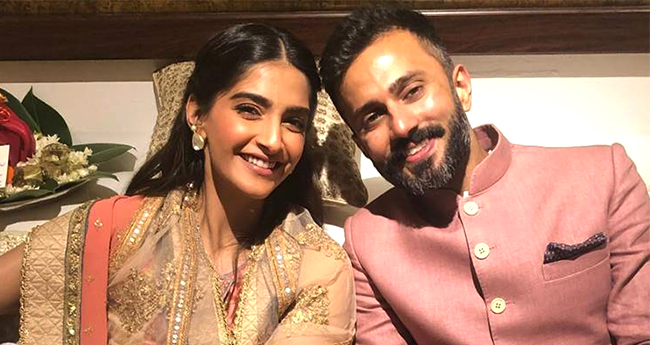 Just after her marriage with longtime beau Anand Ahuja, Sonam Kapoor made her dramatic appearance at Cannes Film Festival as the L’Oreal Paris brand ambassador.

Well, in a current interview with the leading daily Sonam opens up about her concept of name changing as well as how work is similar after marriage.

Undoubtedly, she slew Cannes red carpet look even hands full of mehndi and regarding she said, “I am just wearing things that I like to wear. I don’t think what people are thinking about me and what they say. I just want to be myself and that’s what younger girls identify with too.”

Sonam Kapoor after her marriage rather going on honeymoon back to work and about that, she said, “It is the same. There is no difference. Your life doesn’t change that much (after marriage). Women need to stop thinking that way. Work is going to stay the same, hopefully.”

Anand & I would like to thank everyone who made our wedding the most magical 2 days of our lives. We would like to take a moment to thank each and every one of you who made this day special & here's a few people who deserve a special mention: @ranipinklove for creating the perfect fairy tale wedding! @wedniksha I don’t think we could have pulled this off without you! Thank you for pushing through and making this dream, reality. @jomalonelondon for creating the most beautiful atmosphere! @reelsandframes for capturing our most treasured memories and being our wedding photographers and to @signe_vilstrup @taras84 @thehouseofpixels we can’t wait for the stupendous pictures you took of Anand & I! A special shout out to @BellezaJewels @fizzygoblet @isharya @andmystories_in @teacultureoftheworld for creating beautiful mementos for my nearest and dearest @namratasoni @artinayar @bbhiral @alpakhimani @mallika_bhat @rohit_bhatkar for transforming Anand and me into the best versions of ourselves! @abujanisandeepkhosla @anamikakhanna.in @anuradhavakil @raghavendra.rathore @masabagupta @rajeshpratapsinghworks @jimmychoo @shehlaakhan you are all some of the most talented people I know & my wedding could never have been what it was without your inspired garments. @kapoor.sunita & @amrapalijewels for creating special pieces for Anand and I that will become heirlooms that we can pass on to our children! Special mention @vani2790 @chandiniw @manishamelwani @abhilashatd for styling! @marut_sikka @poojadhingra & @indianaccent you served up a storm! Thank you to the brilliant team at the @theleela @sunteckrealty for the awesome venue @theweddingbartenders for keeping guests in high spirits @anaitashroffadajania @priyanka86 & Divya @vogueindia you guys are so supportive @vandana_weddingplanner for helping with the rituals @ravishkapoorinvitations for fabulous invitations @media.raindrop for always being there The Indian Media thank you for respecting our privacy & celebrating with us & covering us with such positivity & warmth Mumbai Police for all the support Dome Security you guys were on point at all times!

Although she truly believes that she is a feminist in every sense and no one forced her to change her name after marriage, it is her choice only, “I have always said that I am a feminist. I have the choice to change my name to what I want to. Kapoor is also my father’s name. So it is a man’s name anyway. I chose to keep both. Anand has also changed his name but nobody wrote about that. I just decided to do it on social media because that’s my platform to say that I have made a choice. It is my personal choice. Nobody put a gun to my head. You should ask him (Anand). He has also changed his name and decided to add something as well.”

Well, we have only noticed that she changed her name, while Sonam told her husband aka Anand has also changed his name. While she said, “I am a true feminist. I believe in my choice. My husband or his family have not asked me to do anything. I have decided to do it myself. I never asked my husband to do it. He did it himself.”

“The whole idea of feminism is to have equal opportunities and the choice to do what you want to do. So, whether I want to or do not want to change my name is my personal choice”, she added.

The rumour of her shifting to London with him also cleared by Sonam,“I am already living half here and half there (London). In last two years, nobody noticed that I am always in London. I am there for five months and I am here in Mumbai for the rest. My life had not changed and what was happening for the last few years will continue to be the same.”