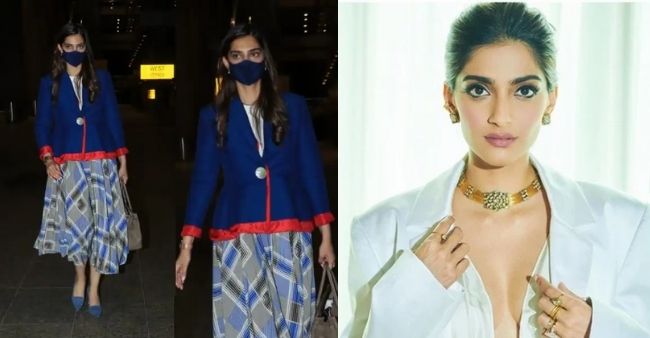 Sonam Kapoor flew back from the English capital yesterday after spending some time there due to COVID-19. She was received at the airport by her father Anil Kapoor. After photos of her arrival were released netizens couldn’t keep calm as they trolled her for her cabin crew-like outfit.

Sonam was wearing a blue peplum jacket with red borders and a patterned midi skirt. For her footwear, she opted for blue ballet shoes and was carrying a handbag. Earlier people were discussing the possibility of her being pregnant due to the peplum on her jacket but those rumours died down as fast as they had started.

She was then trolled for the similarity between her outfit and a cabin crew’s outfit. Trolls wrote, “Lol, cabin crew clothes borrowed”. Another quipped, “If we wear these clothes then we are labeled behenji type but when they wear it, it is a fashion statement.” Another one commented, “Sonam has Zero fashion sense….and she is a self-claimed fashion icon”. It is evident that the trolls were brutal to her.

Sonam has been away from Mumbai for quite some time now. She spent lockdown 1 at Anand Ahuja’s place back in Delhi. Later the couple travelled to Dubai to set up an office and after that, they were in London where Sonam had some work commitments while Anand was working on expanding his business. Sonam will next be seen in a thriller movie called Blind.