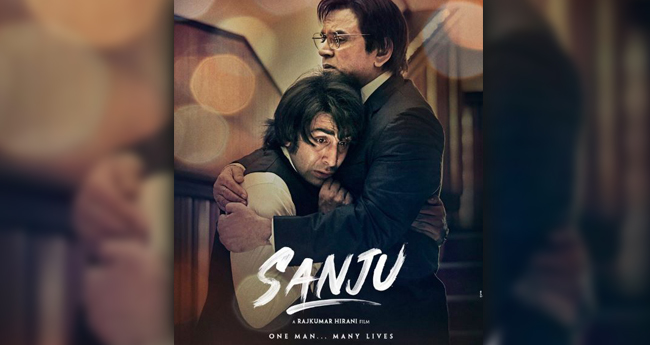 After releasing the poster of RK and Sonam Kapoor the makers of Sanju have now released a new poster of the film featuring Ranbir Kapoor and Paresh Rawal as the Sunil Dutt.

As they impressed us with the character posters of Ranbir Kapoor showcasing Sanjay Dutt’s journey from a superstar to a prisoner. Filmmaker Rajkumar Hirani has introduced one important character and now will unveil one character daily through posters on his official Twitter account.

Rajkumar Hirani took to Twitter shared the poster with the caption read as, “#sanju is a father-son story. Meet the father today – Paresh Rawal. Had fun working with him. #RanbirKapoor @VVCFilms @foxstarhindi @SirPareshRawal”

The film’s trailer will be out in five days but this poster of Sanjay( RK) hugging his dad played by Paresh Rawal is really very appealing.

Also, check the poster of Sonam Kapoor and Ranbir Kapoor: This still takes us back to Sanjay Dutt’s debut film Rocky of 1981 and his crackling chemistry with his co-star Tina Munim.

In an interview to the leading Paresh Rawal said, “Working on Dutt has been amazing because of Rajkumar Hirani, Abhijat Joshi’s writing and because of Ranbir Kapoor’s acting.”

Well, it is said that Paresh was supposed to team with Rajkumar Hirani for Munnabhai MBBS but the role went to Boman Irani.