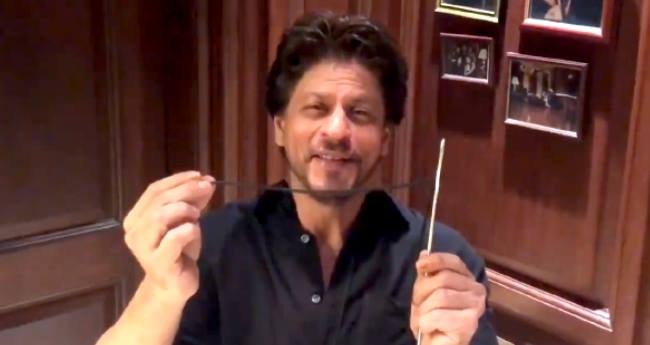 Anushka Sharma and Varun Dhawan’s upcoming flick’s craze is all over India. Yes, we are talking about Sui Dhaaga: Made In India! Be it the teaser, trailer or noted Anushka’s crying face meme, it is getting a positive response. Desi look of both the leading actors is on point with such outstanding acting skills. Once again, they proved that ‘how effortlessly we get into the skin of the character’.

With this, the makers of the film, have come up with a Sui Dhaaga Challenge in which the person needs to be challenged for putting a thread into a needle keeping the theme of the movie. Seems quite easy, but it’s not! Anushka and Varun challenged many co-actors friends including Akshay Kumar, Alia Bhatt, Ranbir Kapoor, Karan Johar who have a tough time doing this challenge.

Humne toh kar diya! Ab aap sab ki baari! @iamsrk , ready to thread the needle for the #SuiDhaagaChallenge ?‬ The challenge is open to everyone.. so share your videos on social media tagging @yrf , @suidhaagafilm with #SuiDhaagaChallenge & nominate your friends! #SuiDhaagaMadeInIndia

Sharing the video on his Twitter account he wrote, “@AnushkaSharma challenge done my way. Love u and all the best for Sui Dhaaga. May everyone’s hard work & belief be appreciated and rewarded.”

@AnushkaSharma challenge done my way. Love u and all the best for Sui Dhaaga. May everyone’s hard work & belief be appreciated and rewarded. pic.twitter.com/Nc1xb3Jlx6

After watching the video, we bet you can’t keep your laughter.

Even SRK’s Raees co-star Mahira Khan can’t keep herself commenting on his video. She comments, “Gangsta Khan” and yes, we can’t agree more.

Anushka and Shahrukh share a very friendly bond and till now they have done three films together and prepping for the fourth one. Anushka debuted with SRK in Rab Ne Bana Di Jodi, after which they reunite in Jab Tak Hai Jaan, Jab Harry Met Sejal and will be next seen in most awaited Zero. Anushka is enjoying her career’s high time with many projects in her kitty.

We wonder how Deepika Padukone and Ranveer Singh will compete with SRK tiny second who was tagged yesterday by Ranbir Kapoor and Karan Johar.

Meanwhile, Sui Dhaaga is slated for the release of 28 September 2018.