SRK’s Daughter Suhana Enjoyed A Day Out With A Friend In NY; See Pics 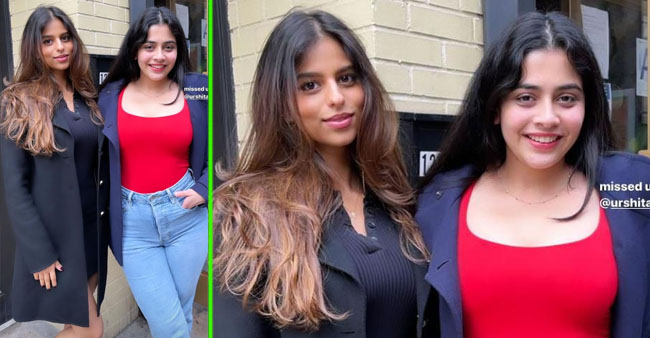 Bollywood badshah Shah Rukh Khan’s laadli beti, Suhana Khan, spent a day out with her bestie on Sunday. The two cute girlies also gave some poses in the streets of New York. Suhana looked fabulous in a black bodycon outfit that she matched with stylish brown Uggs. She too puts on a black overcoat. She kept her long, brown locks free. Her bestie Urshita Vaishnav was also witnessed in a red upper, blue jeans, blue jacket and red heels.

While sharing a photograph of the two on Instagram Stories, she penned, ‘missed u’. The star kid also tagged Urshita in her post. She also posted a pic of their shoes with the tag ‘hehe’.

Suhana is studying in New York. She is completing her course in film studies. Like her proud daddy, she also wants to become a successful star. She keeps on posting her pics and videos on a regular basis sharing a special glimpse of her life in New York, comprising pics with besties, peeps of her apartment and more. Recently, Suhana came up with some mesmerizing pics on Instagram but removed them later. But, she did not disclose the reason behind removing the pics from Insta.

In the year 2020, she had opened talked on the mistreatment that she confronted on Instagram. In a special post, the star kid penned, “There’s a lot going on right now and this is one of the issues we need to fix!! this isn’t just about me, it’s about every young girl/boy who has grown up feeling inferior for absolutely no reason. Here are just a few of the comments made about my appearance. I’ve been told I’m ugly because of my skin tone, by full grown men and women, since I was 12 years old.”

“Other than the fact that these are actual adults, what’s sad is that we are all Indian, which automatically makes us brown – yes we come in different shades but no matter how much you try to distance yourself from the melanin, you just can’t. Disliking on your own people just means that you are painfully insecure,” she also stated.