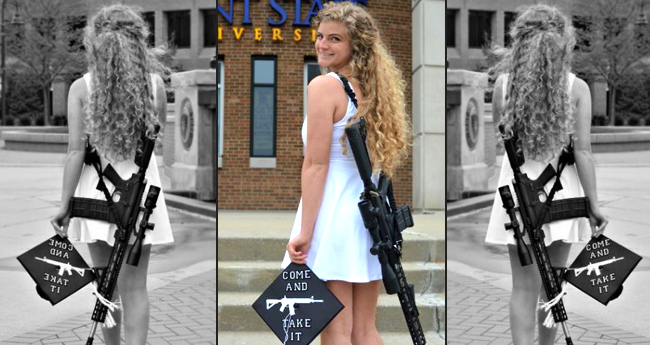 A graduate student from America is getting media attention these days. Her social media pictures are a topic of discussion and the reason is somewhat shocking. She was caught handling a Riffle in her hand and going to college. The girl named Kaitlin Bennet posted this picture on her Twitter account.

Now that I graduated from @KentState, I can finally arm myself on campus. I should have been able to do so as a student- especially since 4 unarmed students were shot and killed by the government on this campus. #CampusCarryNow pic.twitter.com/a91fQH44cq

Some of the Twitteratis supported her while some were against her. She said in an interview that her intention was just to raise voice about gun rights for students in campuses. Kaitlin is happy from the positive response of people. Well, her Twitter account says how much she is concerned about student safety.

I am so proud of the stand you took to better empower women and college students in general. I hope the laws are changed drastically in the coming years. I have a daughter who will be headed to college soon, and I can only hope that she'll be able to protect herself. Thank u!!!

may I just ask what exactly you need a weapon like that for other than a task that would lead to mass destruction. that’s a weapon of war. was this to merely start controversy or are you just an extremely hostile and dangerous person? you shouldnt be taking so much pride in this

Considering the Kent State massacre was in retaliation to students protesting military violence, I think you and your gun missed the mark on this one. Also, don't use a tragedy to push your gun agenda, and don't pretend you'd shoot at the government. Your Republican is showing.

Her posts clearly say that the girl is not in support of the government. According to Kaitlin, citizens should keep weapons as the government keeps them in-order to save themselves from a tyrannic government. She also supports the second amendment which talks about the right of a citizen to keep and bear arms. Her graduation cap says ‘come and take it’.

Thank you to @BlueTargetFire for selling me my first gun, and for also offering me a job tonight! I'm honored to defend the 2nd amendment alongside you guys. #CampusCarryNow pic.twitter.com/4H1uO0rXo3

Her photos are creating headlines. She was also invited to a show where she revealed the whole story behind her graduation pictures. The 22-year girl is graduated from Kent State University where 4 unarmed students were brutally killed by guardsmen. The students were protesting against the bombing of Cambodia by US military forces in 1970. All in all the girl seems a supporter of the second amendment and is no doubt influencing students to carry weapons for their safety. She took the photographs on Sunday and keeping in mind that she is now graduated from the school. This allowed her to unfollow the policies framed by the school which didn’t allow the students to carry weapons in the campus.

Groom beats drum at his own wedding, Netizens calls him “Atmanirbhar Dulha”...