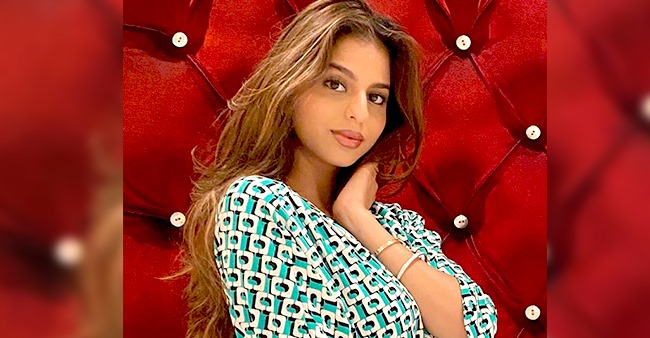 We have seen Suhana Khan, Shah Rukh Khan’s daughter, to remain in talks for the past few weeks. Suhana has raised her voice against colorism as she had to face objectionable comments on her skin tone. She gave a befitting reply to those comments. Meanwhile, the beloved one and only daughter of King Khan shared a picture of herself which is enough for the followers to go gaga over her looks.

Amid all the talks, Suhana has continued to mesmerize her Insta followers with her unmissable glimpses. Now, she has posted yet another ‘too hot to handle’ click of herself. As the picture reflects her gorgeousness, the caption is engaging too. She poses for the camera while sitting on a bed and the red headrest behind her is also classy enough to match her radiant looks.

Flaunting a turquoise, white, and black patterned printed dress, with minimal makeup and tresses left down, as usual, Suhana’s hotness quotient crosses all the boundaries. The way she sits and looks at the lens only makes her more scintillating. The caption was, “gonna post this before I stare at it long enough to start haxing it.”

Suhana’s fans and close friends couldn’t be refrained from showering likes and comments on the picture. Maheep Kapoor, mother of Suhana’s best friend Shanaya has also shown lots of love to the star kid after seeing the pic.

Suhana was recently spotted in UAE along with her brother Aryan and dad Shah Rukh Khan while they were cheering for SRK’s team KKR in IPL.