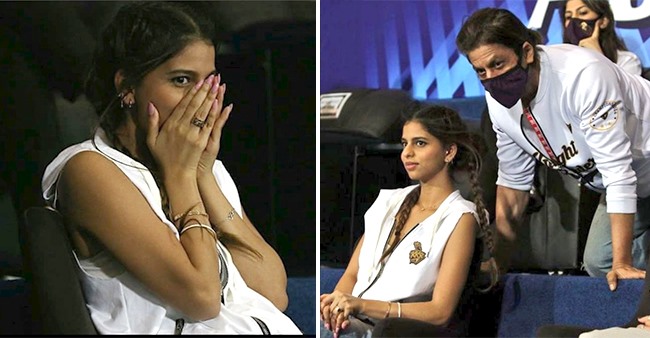 But, SRK often comes to the ground to cheer his team and fans also get excited to see him in the gallery. We have seen him coming to the stadium with Aryan and Suhana many times. Not only SRK, the kids’ reactions as well catch the eyes of the fans. Sometimes their expressions just go viral on social media the next day after the match.

As this year’s IPL is going on in the UAE, the family is staying there. Gauri Khan also visits the ground. She was present in the previous match and her pictures were also shared on social networking platforms.

The pictures of SRK and kids clicked on Friday were shared by a fan’s account. It showed SRK wearing a KKR white sweatshirt. Suhana was wearing a white outfit as well whereas Aryan wore red. SRK was wearing a mask and his hair was tied in a ponytail. Different reactions of Suhana were caught on the camera, which attracted all the eyes.

Recently, Suhana Khan shared a picture of herself striking a stunning pose. She looked awesome in the picture with a green dress, subtle makeup and tresses left down. She had also posed wearing her mother’s dress which caught all the eyeballs.

Suhana raised her voice against colorism recently. She had been criticized for her skin tone. Posting the screen captures of those comments, she urged to end colorism.