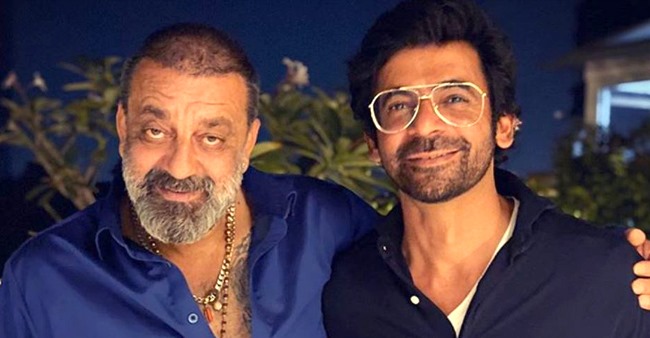 Ace comedy star Sunil Grover is having the best time of his life at the moment. The most talented comedian has been travelling different places and unleashing his inner child by visiting the foothills.

Of late, Sunil Grover aka Gutthi met renowned Bollywood hunk Sanjay Dutt. He too posted the image on his personal Instagram handle.

Sunil Grover’s smiling face is evidence enough that he gets starstruck by the loving and kind impression of Sanju Baba.

While sharing the image, the comedian also gave it a special caption, which reads, “Legend”.

Sunil Grover’s admirers were seen praising them in the comment box. Some of the fans have written, two stars in one frame while others wrote two legends.

Some of the fans also wrote Gutthi with Sanju baba. Other buffs reacted by making use of different emojis.

While talking about Sunil Grover, he recently paid a visit to a school and clicked pics with the children as one of the pupils with his bag and books. The well-known actor had stated that he felt enjoyable and happy with the students.

He is known for his popular and super-hit characters, Gutthi, Dr. Gulati and Rinku bhabhi. The actor said that he loves playing a woman onscreen.

Elaborating about it, he told media people, “I loved playing all characters that I have played so far, but somehow I love becoming a woman on screen. Mereko sari pehna do mujhe maza aa jata hai. It is not easy to play a woman – it requires a lot of practice. I think I feel very comfortable being a woman on screen and that is why people like me in that role.”