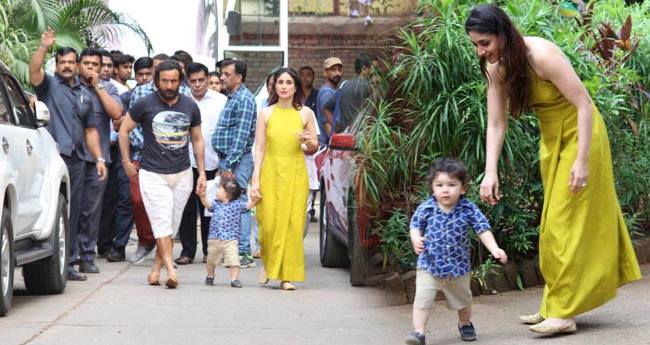 Kareena Kapoor Khan is quite busy in the promotion of her upcoming film alongside Sonam Kapoor Ahuja and Swara Bhaskar titled Veere Di Wedding these days and this makes her not giving much time to her family. So, the daddy cool of little Nawab Taimur Ali Khan decided to surprise the mommy.

Saif and Taimur reached her set at Mehboob studio in Bandra. As soon as Kareena saw her little munchkin on the set, she couldn’t control her happiness which we can clearly see in the pictures. Even Taimur was looked very playful in the company of his mommy and daddy.

Media and ofcourse the fans of Bebo and Taimur love to see the pictures of them but Kareena feels it’s not right for the paparazzi to barge into their personal space every now and then.

Bebo told that “We just want him to lead as normal a life as possible. That’s the most important thing for him. I’d like the paparazzi to not shoot pictures of him every moment. I don’t want his life to be documented. He is only 17 months old, once or twice is enough, but not the constant badgering.”

Lately, when Kareena was asked whom does Taimur resemble. To this, she said, “I think Taimur looks like his father. He is looking more and more like his father now. His eyes look like a Japanese samurai.”