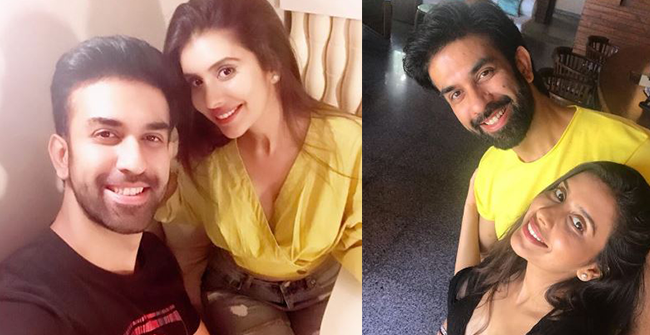 There have been this news that Sushmita Sen’s brother Rajeev Sen and and his wife TV actress Charu Asopa have unfollowed each other on instagram but now everything is good in between them as they have followed each other back on Instagram.

The duo are back once again in the same frame and rumours remained as rumours only and it is really a good news for them and for their followers and fans as well. Recently, Sushmita Sen’s brother and his wife Charu were hitting the headlines over the rift that created on social media when they unfollowed each other on Instagram.

Rajeev, putting rest to the rumours, shared a post on his Instagram handle where both newly married couple are looking awwdorable. He captioned the pic as – ‘Our first delhi dinner date’.  By looking at his pic we can assume that either there was nothing fishy between them or they might have sorted their fight out.

According to a report, when Charu was contacted regarding their rift she denied to talk on this matter and said she doesn’t want to say anything about it.

On 16th June this year, Rajeev and Charu had a dreamy wedding in Goa and went on to two different places Darjeeling and Thailand for their honeymoon. Their Instagram is filled with their lovy-dovy pics and gives serious couple goals to their fans.

Pitty fights between the couples keep on going but breaking up and unfollowing each other on social networking site is not an option. It’s better to clear things rather dragging them to the worst situation.