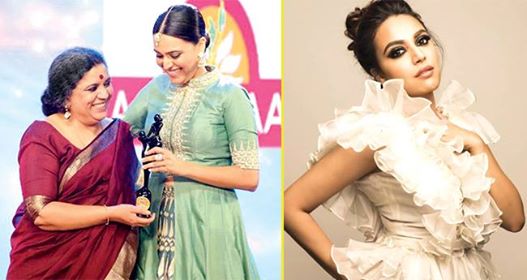 Swara Bhaskar, known for her acting skills and beauty has worked in movies like Padmaavat, Prem Ratan Dhan Payo, Nil Battey Sannata and Tanu Weds Manu Returns to name a few of many. Her latest outing, Veere Di Wedding has created a huge buzz and is also doing wonders on the Box-Office.

Bold scenes in the movies have always been a talk of the town for movie lovers. The explicit scenes usually create a huge buzz for the film which plays important role in movie’s box-office performance. Veere di Wedding is all about four girls and their bold life.

Ira Bhaskar is a film historian with a PhD from the Tisch School of Arts and is a professor of Cinema Studies at Jawaharlal Nehru University. And she is also proud mother of actress Swara Bhaskar. In an interview with a news portal, Ira opened up about bold scenes in the films. “Let me begin by saying that sexuality per se in Indian cinema is not a subject that has been directly expressed. At the same time, historically, our cinema is unique in the sense that it has developed, over the years, a very complex and refined idiom on eroticism. And that idiom is the song.”

She further added, “A lot of things that can’t be addressed directly can be addressed through the song. Be it the Hindi film song, or the Bengali film song. Malayalam or Tamil. You don’t find this anywhere else—as a fundamental and defining feature of the form itself. A lot of the articulation was done through song. Emotional articulation. Articulation of what is tabooed. Sexuality and eroticism.”

Furthermore, stating some examples, she said,

“Just think of ‘Mughal-e-Azam’: in that song ‘Jogan Ban Chali’, that word jogan actually is Meera—the one who has renounced the world for her lover. So this completes dedication to the object of your passion. What is that but female desire?”

She even went on to add that in films like ‘Lipstick Under My Burkha’ and now ‘Veere Di Wedding’, you can see women who are sexually active. Ira even expressed her thoughts that for such scenario to evolve, where women representation can be portrayed realistically, it will take some time. It would be interesting to know what Swara has to say about the same.