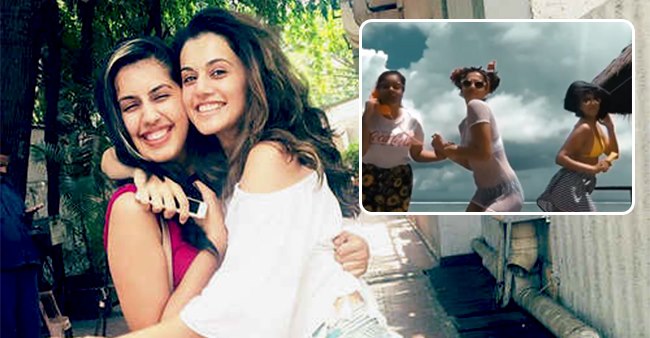 Actress Taapsee Pannu’s fans can’t stop gushing over her pictures and videos. Now as the actress is enjoying her vacay in the Maldives to the fullest with her sister Shagun Pannu, another cousin sister, and the love of her life Mathias Boe, Taapsee’s vacay mood glimpses are making social media followers go gaga over her.

The fans like the pictures and videos which are showcasing the gorgeous ladies and the handsome guys living the blue water, white sand and the stunning sunsets to the fullest. A recent video shared by the actress on her Insta stories has created a new sensation on the internet.

It’s that kind of a day….. N when your stylist appreciates your skills and extends the garment sale ! @devs213 Activated code TAAPSEEFORMATI just for this set So until 14th October the customers can get 20% on this outfit .

The video shows the Pannu sisters to perform their hearts out in an overwhelming manner. They used different props for their performance. The dance and the hilarious expressions by them are too awesome to handle. The song just added to the craziness of the video because it is already a trending song of recent times.

Social media star Yashraj Mukhate, the famous “Rasode Mein Kaun Tha” wrapper, has given his vocals to the song which is a superhit among netizens now. The caption to the video was, “So what did Pannus do in the Maldives ??? ….#BigginiShoot #BigginiShxxtWithPannus @shagun_pannu @evaniapannu Feat @mathias.boe.”

Not only Taapsee’s fans, but the celebs also couldn’t resist themselves from reacting to the video. And the list includes some heavy names like Anushka Sharma, Varun Dhawan, Bhumi Pednekar, Vikrant Massey, Kajal Aggarwal and others. Kajal wrote, “Hahahah Pannus kixxing it as usual.”

Mathias Boe, Taapsee’s beau, is a badminton player by profession. Though he is not often seen to react on the posts of the actress, he wished her on birthday very sweetly.