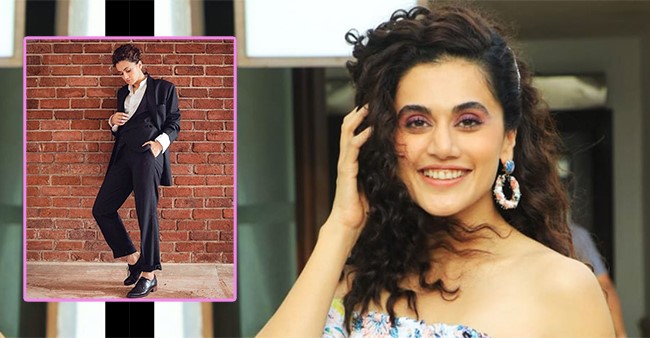 Published by siddhi ajgoankar on 09 Apr 2021

Actress Taapsee Pannu has quite a presence on her social media handles. She shares updates about her day-to-day and professional life on these platforms. Her fans and followers gush over how gorgeous she looks in the jaw-dropping pictures. Taapsee’s recent picture has made netizens go gaga as she is radiating boss lady vibes.

The picture seems to be clicked during one of her photo sessions. In the picture, Taapsee Pannu is wearing a stylish pantsuit. Speaking of her outfit, it an all-black co-ord which the actress has paired with a chic white shirt and a pair of black boots. The Thappad movie actress is leaning against a wall and she candidly strikes a pose for the camera.

Apart from the oh-so-stylish picture, the other thing which grabbed everyone’s attention is the obvious funny question she has asked in the caption. The caption alongside Taapsee’s recent picture reads, “When they say “who wears pants in the house”…. (sic).”

In no time, Taapsee’s latest IG post has garnered thousands of likes and her fans are dropping heart-eyes emojis and fire emojis in the comment section. They can’t help but notice how elegantly the Pink movie actress is carrying the boss lady look.

A few days back, Taapsee Pannu penned down a heartfelt note to wish her younger sister on the occasion of her birthday. The actress shared a boomerang clip on Instagram in which is placing a kiss on her sister Shagun Pannu’s cheek.

The birthday note reads, “My constant …The girl and the behaviour It’s the Birthday of my silver lining while she celebrates it at the Golden Temple.. Miss you Puchi (sic).”

On the professional front, Taapsee Pannu has a few much-anticipated movies in the pipeline. She will be featuring in Looop Lapeta, Rashmi Rocket, and Shabaash Mithu.

As of now, she is preparing herself for her upcoming movie Shabaash Mithu on the grounds. The movie is going to be based on the life of former Indian women cricket team’s skipper Mithali Raj.

Taapsee is working very hard to nail her role in the movie with absolute perfection.