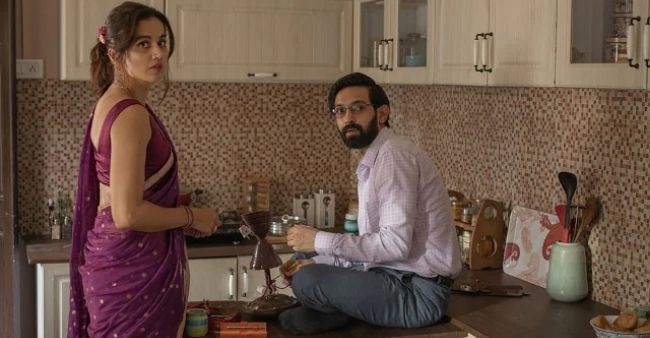 Taapsee Pannu is quite active on social media. The actress posts photos from her trips and is interactive with fans. Recently she took to her story on Instagram to reply to a fan who was talking about her character in Haseen Dilruba.

A fan had tweeted, “Taapsee had 2 guys falling for her in Haseen Dillruba and I’m jealous coz the only thing falling for me is my hair.” Taapsee posted the tweet on her Instagram story and replied, “By the way, Rishu has a solution to that problem in the film.” In case you haven’t watched it yet, maybe you should.” Taapsee was referring to Rishu, Vikrant Massey’s character in the recently released film. Vikrant had revealed in an interview earlier that he relates to his character in the film a lot. He had said that he is a simple guy like him and relate to him in a lot of ways. Vikrant Massey plays the character of Rishu, an engineer with nervous and wiry energy.
Taapsee was last vacationing in Russia with her sister Shagun. She posted several eye-catching photos from her trip on Instagram. She is now working on some interesting projects such as  Shabaash Mithu which is a biopic on the life of Indian Women’s Cricket Captain, Mithali Raj. Next, she has Looop Lapeta and Rashmi Rocket. She is also working with her good friend Anurag Kashyap again in Dobaaraa. Anurag Kashyap has earlier directed Taapsee in Manmarziyaan.

Malaika Arora opens up on dealing with her divorce; Calls it ‘lowest phase’ of her life...

Priyanka Chopra and Nick Jonas trolled for welcoming child via surrogacy; Netizens question ‘why did they choose surrogacy’...

Did you know Shahid Kapoor once filed police complaint against veteran megastar’s daughter?...