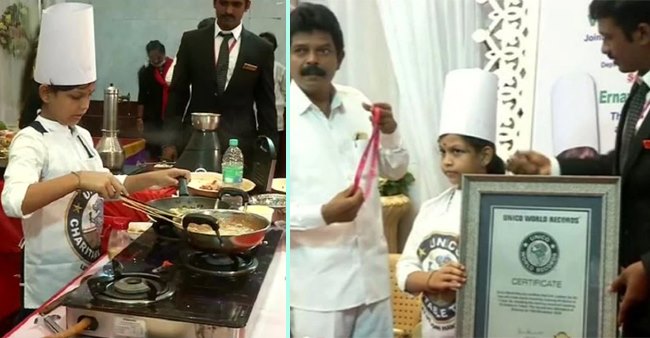 Recently, on Tuesday, a girl from Tamil Nadu has entered UNICO Book of World Records by cooking 46 dishes in 58 minutes in Chennai. Her name is SN Lakshmi Sai Sri, and she has created a world record.

While talking to a news portal about the same, SN Lakshmi revealed that she developed an interest in cooking and she was trained by her mother. She said, “I have learned cooking from my mother. I am very happy that I have achieved this milestone.”

Meanwhile, her mother, N Kalaimagal, talked about this achievement of her daughter and revealed how Lakshmi started cooking in lockdown. She revealed that Lakshmi grew interest in culinary during lockdown. When her father realised that she was doing a great job, he suggested her to attempt to create the world record.

Talking to a news portal, N Kalaimagal said, “I cook different traditional cuisine of Tamil Nadu. During the lockdown, my daughter used to spend her time with me in the kitchen. When I was discussing her interest in cooking with my husband, he suggested that she should make an attempt on world record on culinary activity. That’s how we got the idea.”

Lakshmi’s father did some research and found out that Saanvi, a 10-year-old girl from Kerala, made 30 dishes and so he wanted his daughter to break Saanvi’s record.

As soon as the news went online, the whole social media started going gaga over Lakshmi’s amazing culinary skills. There were many tweets, posts and comments about Lakshmi’s achievement and it has not stopped yet.

It’s funny and miraculous that there are some people who take 20 minutes to cook a 2 minutes noodles, and then there is SN Lakshmi Sai Sri who went ahead and cooked 46 different and traditional dishes in just 58 minutes.

Published by Vidhutma Singhania on 16 Dec 2020

Good News for Biryani lovers as it becomes the most ordered food in 2020...

Deepika’s dosa to Priyanka’s protein shake: B-town celebrities that have dishes on their names...