Thailand Cave: Four Out Of Twelve Children Rescued And Mission To Rescue Others Has Started 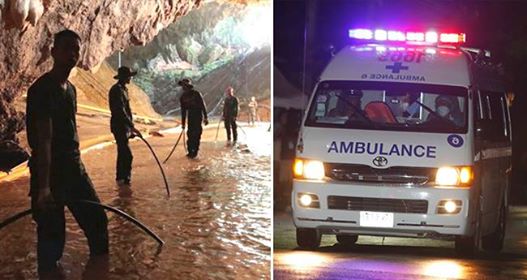 A group of few children and their coach were stuck inside a cave for a few days due to heavy rain in Thailand. The rescue mission has started but the continuous rain is increasing problems, both inside and outside the cave.

According to reports, yesterday four boys were rescued by team of 13 foreign divers and five Thai navy Seals through helicopter. The four boys who were rescued last night are in good overall health and should be able to see their families later today. Dr Thongchai Lertwilairattanapong, an inspector for Thailand’s health department, said the four boys have undergone a series of tests at Prachanukroh hospital in Chiang Rai. He told the Thai daily newspaper Kom Chad Lek, that the boys should be able to see close relatives later today after tests were completed, but warned there must be no physical contact until the results of blood tests came back. “Visitors will only be allowed to meet and talk to the patients,” he said. “No hugging or touching and they [visitors] need to leave a one to a two-metre distance from the patients until the results of their blood tests come back.”

Thongchai said doctors were checking to make sure the children are free from serious infections such as leptospirosis and melioidosis. The leading newspaper said the kids have undergone blood tests, lung X-rays and urine tests. One of the concerns is refeeding syndrome, which can affect people who have experienced severe malnourishment. Still, eight children and their coach are in the cave. Somboon Sompiangjai, 38, the father of one of the trapped boys, has told Reuters that parents were told by rescuers ahead of Sunday’s operation the “strongest children” would be brought out first.

“We have not been told which child has been brought out … We can’t visit our boys in hospital because they need to be monitored for 48 hours,” Somboon told Reuters.

The first boy will emerge about four to five hours from the press conference, meaning between 7.30pm and 8.30pm local time #ThamLuangCave @sloumarsh

The rescue operation to extract more boys from the cave is underway, official reports have now confirmed. Thailand’s interior ministry said the same divers who went in on Sunday to take out four boys had also gone in on Monday. There are no reports as of yet on their progress.

Asked which boys are coming out first he says, “The perfect ones, the most ready ones” #thamluangcave @sloumarsh

On Monday, several ambulances drove by the press centre, a mile from the cave, and a helicopter flew overhead toward the rescue site. The rescue mission has started again with a great pace following the weather forecast. Speaking at a press briefing, officials suggested that the stronger boys would be rescued first.