Shahrukh Khan New Bath Selfie Will Let You to Kickstart Your Week, See The Picture Inside 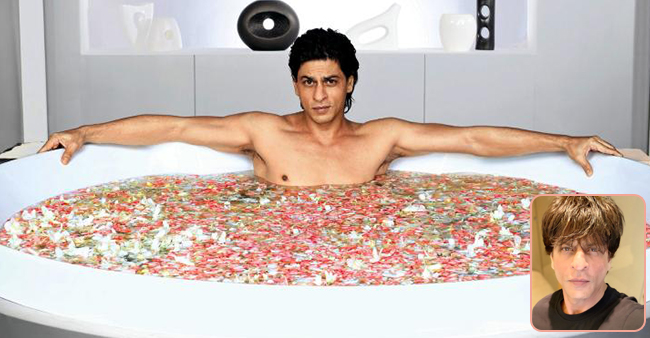 The King Khan of Bollywood aka SRK is all set to entertain us once again with the most anticipated movie ‘Zero’. This movie directed by Aanand L Rai which also stars Anushka Sharma and Katrina Kaif is going to release on 21st December. The trio is going to refresh the memories of Yash Raj’s ‘Jab Tak Hain Jaan’.

Will get back to work now. As always sorry couldn’t reply to u all but then so many requests for hugs and just a hi. To all those who didn’t get a reply…sending u a bright red pic… pic.twitter.com/H9Gqw6mvg3

One more thing is also there for which the fans are really excited! SRK’s best bud, Salman Khan… Salman will have a cameo in this movie alongside SRK in ‘Zero’. In this movie, SRK for the first time is playing a dwarf character who dreams of dating a specific superstar. Produced by wife Gauri Khan and Karuna Badwal, this film has a special release on Eid, this year.

Recently, Shahrukh Khan shared a selfie, taking to his social media on Monday. SRK did remove the ‘Monday Blues’ of his fans. Sharing the picture on his Twitter Official, SRK wrote, No reason..no information…nothing to share, just ‘feeling good about life after a bath’ selfie…”

Maybe it’s an ‘after bath selfie’ for SRK but it is most loved by us!

No reason..no information…nothing to share, just ‘feeling good about life after a bath’ selfie… pic.twitter.com/I0ZB3uFFau

Well, SRK we don’t blame you for this, people all over the world hate the starting of weekdays. Shahrukh still can give any guy a tough competition or we think he is…

On the other hand, Katrina has a handful of movies in his kitty and is on a ninth sky. Currently, she is shooting for her upcoming flick Bharat alongside Salman Khan. The girl is also awaiting for Diwali release movie ‘Thugs Of Hindostan’, a multi starer movie which stars Amitabh Bachchan, Aamir Khan and Fatima Sana Sheikh.

Talking about Anushka, the actor recently gave a hit film Sui Dhaaga alongside Varun Dhawan and is making waves all over India for the terrific performance of a village girl.