The Unbelievable Transformation Of Kriti and Nupur Sanon Amaze Everyone 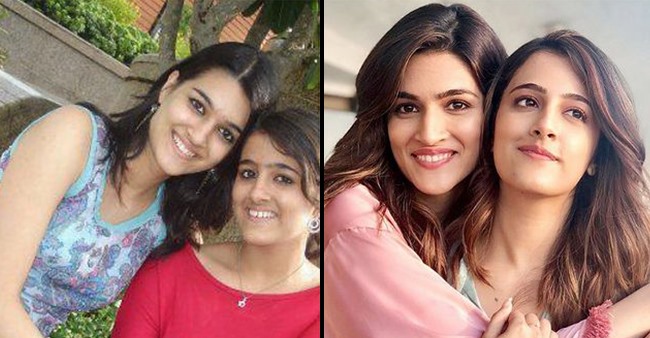 Bollywood actress Kriti Sanon and her sister Nupur Sanon are one of the most loved sibling-duo in the film industry. Both grab the limelight on the internet with their stunning pictures. A throwback picture of the siblings before they entered the industry has recently popped up on social media and left everyone in surprise. A collage of Kriti Sanon and Nupur Sanon’s ‘Then and Now’ picture was shared on Instagram by FitLook magazine and their amazing transformation has left all their fans amazed. If we go through the pictures, we can see that there is one shot from their teenage and in this pic, both of them looks like two common girls. But in the next one, Kriti and Nupur can be seen in their nightwear. The glow up of the Sanon siblings is something that most of their fans love to see.

Of late, Kriti Sanon has been creating headlines with her stunning look from her upcoming movie Ganapath and in this project, she will be acting along with Tiger Shroff for the second time in her career after her debut movie Heropanti. Kriti has posted the first look of the movie through her Instagram handle, in which the actress can be seen in a rare biker avatar. While sharing the picture, she revealed that she is highly excited about this upcoming project. The picture got a huge response from her fans on social media and they really seem to have enjoyed it.

Kriti Sanon will also be seen in other movies such as Bachchan Pandey, Mimi and Second Innings.

Recently, Kriti was appointed as a brand ambassador of a hip-hop festival, said. “This platform will be a great opportunity to showcase the plethora of talent. Even workshops are going to be conducted. I shall pep and cheer the participants. It’s online and hence easily accessible. I am really looking forward to this assignment.”