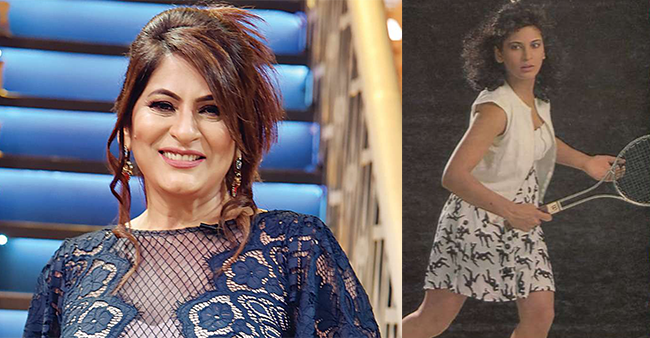 It is Thursday and obviously it the time for most of our celebs to come up with the throwback pictures of theirs.  The Thursday throwback picture of this week is sponsored by none other than the laughing queen of B’wood Archana Puran Singh.  The picture she shared is an unseen one and she herself admits to it.  The picture that Archana shared depicts a girl with a rocket in hand and the comedy queen claims that it is her in the pic.

Strike a pose… just do it! #throwbackmodelling I have no idea where or when this picture was taken. Zahir hai ek zamaana ho gaya! 🤭 #retrobollywood

She looked totally unrecognizable in the pic and it is from her modeling days according to her.  Sharing the picture she wrote:  “Strike a pose… just do it! #throwbackmodelling I have no idea where or when this picture was taken. Zahir hai ek zamaana ho gaya! #retrobollywood.”

On Thursday Archana took us all back to the memory lane where she was a young model.  The actress is currently a part of The Kapil Sharma Show as a judge.  She shared the picture from her modelling days with a beautiful caption that she have no idea where and when the picture was taken.  She is best known for her laughs on the stage of Comedy Circus.

Coming to the career of Archana, she started her TV career with Wah, Kya Scene Hai followed by many TV shows including Jaane Bhi Do Paro, Shrimaan Shrimati and Archana Talkies. She even participated in Nach Baliye season 1 with her husband Parmeet Sethi but got eliminated early.

It was the couple that hosted the first season of famous reality dance show, Jhalak Dikhhla Jaa season in 2006. Later, she started her career as a judge to many super hit comedy shows like The Great Indian Family Drama, Comedy Circus among others.

She is currently seen in The Kapil Sharma Show as a judge.  The show airs on Sony TV and features Kapil Sharma in the pivotal role.  Coming to the family front of Archana, she is married to actor Parmeet and they have two sons, Aaryamann and Ayushmaan.