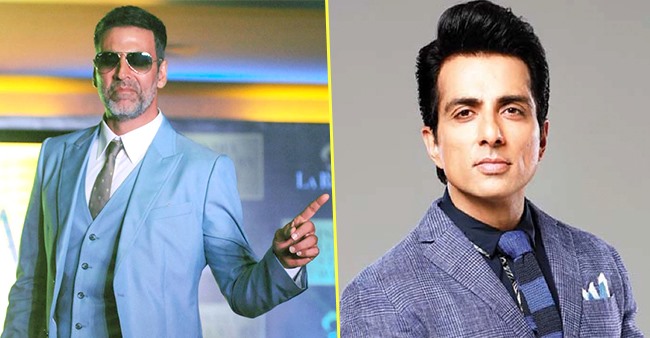 As per latest reports, the ‘Bharat Ratna’ hashtag has been making trends all over the microblogging site, Twitter recently as the fans of Bollywood stars Akshay Kumar and Sonu Sood have demanded India’s highest civilian honor for the actors. Buffs and admirers have been heaping praise on the Akki and Sonu for their hard work and contribution during the ongoing pandemic.

These are two Real souls ,who are able to get Bharat Ratna award. 🔱🇮🇳@SonuSood & @akshaykumar pic.twitter.com/BBJcAOOgxc

The Dabangg actor has been greeted by the social platform as a ‘superhero’ for making arrangements of buses to aid hordes of stranded migrant workers to reach their hometowns amid lockdown.

Akki finds a name on the list not only for his special and big monetary contributions towards the relief work but also for his input to support families of people who sacrificed their lives in Pulwama. In the year 2017, he rolled out the app and website ‘Bharat ke Veer’, together with the Union ministry of Home Affairs, to aid families of armed forces. After the Pulwama incident in 2019, Akshay had made a promise to make a donation of Rs. 5 crore through ‘Bharat Ke Veer’.

Main two person whom I luv the most both are great actors and a adore persons. Really they deserve BHARAT RATNA@akshaykumar @SonuSood pic.twitter.com/GBK3wDGuEI

In addition to helping migrants reach their hometowns, Sonu and his squad also gave food and rehabilitation to 28,000 people living near the coastal lines when Cyclone Nisarga reached Mumbai in June.

@akshaykumar and @sonusood helped from the bottom of heart.
They deserve Bharat Ratna…..🙏 pic.twitter.com/Nmi4pFjPfv

Sood had also introduced a toll-free number to ease the migrants to get to their homes. “I was getting a lot of calls… thousands of calls every day. My family and friends were busy collecting the data then we realised we might miss out on a lot of people who we will not be able to approach us. So we decided to open this call centre, it is a toll free number,” Sood stated.