Being A Veggie, Seeking Spirituality & Listening To Wife Have Immensely Improved Shahid’s Life 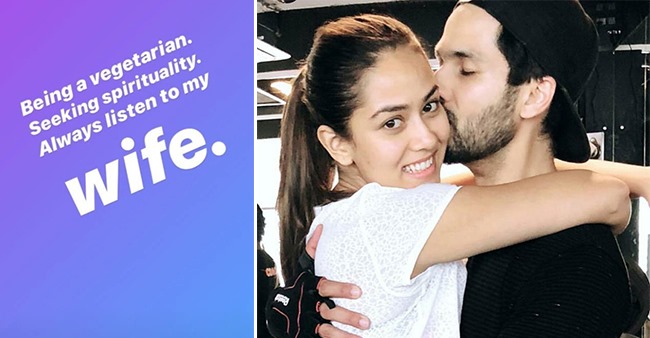 The whole world is facing a huge problem and the inhabitants have decided to stay inside, self-quarantining as the problem is spreading all over the realm. While sitting inside their homes, people are making the most of their free time. Some people have decided to enjoy and cook different foods, reading books, cleaning their places and a lot of other ways.

During his free time, Bollywood’s super star Shahid Kapoor carried out an AMA (Ask Me Anything) session with his admirers and buffs yesterday and replied to some very exciting queries that his admirers asked. Some fans asked queries how to grow a beard like him, while others asked him about upcoming movie Jersey, and the actor answered it all. Amidst this special session, the actor also mentioned exciting details about his private life related to his wife, Mira Rajput!

Shahid Kapoor and Mira Rajput are unquestionably one of the most respected pairs of the Hindi film industry. They are frequently giving out major relationship goals even after 5 years of tying the nuptial knot. During the special session, a fan asked Shahid, “What three habits have improved your life.” To which, Shahid replied, “Being a vegetarian. Seeking spirituality. Always listen to my wife.” In the meantime, on the film front, the actor will next be witnessed in the movie Jersey, also starring Mrunal Thakur. The film is based on cricket and is a Hindi remake of the Telugu film of the same name which stars Nani. The film is scheduled to release on August 28, 2020.