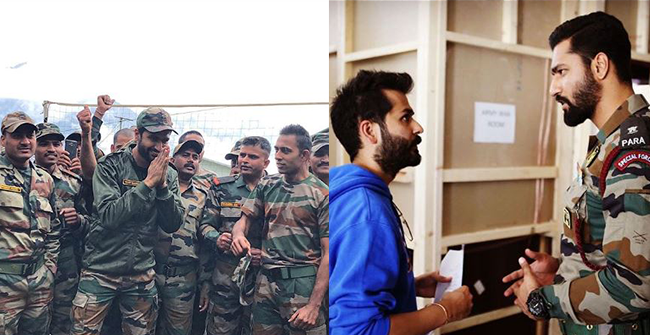 Uri: The Surgical Strike star Vicky Kaushal left everyone stunned with his stellar performance in the film. He now is elated when he spends time with the Indian Army. The Masaan star is set to don the military uniform for the second time and he has recently shared a picture with the Indian Army personnel on his Instagram handle.

Vicky, while captioning the picture, wrote – “Elated to be getting an opportunity to spend a few days with our Indian Army posted at 14,000ft altitude at the Indo-China border of Tawang, Arunachal Pradesh”.

Elated to be getting an opportunity to spend a few days with our Indian Army posted at 14,000ft altitude at the Indo-China border of Tawang, Arunachal Pradesh. #JaiJawaan 🙏

On the work front, Vicky will be seen next in films like period drama Takht, Bhoot Part One – The Haunted Ship, and untitled film where he will be seen as Field Marshal Sam Manekshaw, helmed by Meghna Gulzar.

I feel honoured, emotional and proud of getting a chance to unfold the journey of this fearless patriot, the swashbuckling general, the first Field Marshal of India- SAM MANEKSHAW. Remembering him on his death anniversary today and embracing the new beginnings with @meghnagulzar and #RonnieScrewvala. @rsvpmovies

Recently, on 26th July, Maharashtra’s Chief Minister Devendra Fadnavis gave a perfect gift to Vicky Kaushal’s fans. He re-released Vicky’s 2019 blockbuster hit Uri: The Surgical Strike to theatres to commemorate Kargil Vijay Diwas, which is celebrated on July 26 every year. The initiative to screen the film in 500 theatres was free of cost across the state of Maharashtra.

Happy and honoured to share that our Film #UriTheSurgicalStrike will be re-released only for today, July 26th, to commemorate #KargilVijayDiwas. It will be screened for free in 500 theatres across Maharashtra. Extremely thankful to the Maharashtra State Government for their support and encouragement to this initiative by @rsvpmovies. Jai Hind 🇮🇳

Vicky played the lead role of Major Vihaan Singh Shergill in the film. He took to Twitter to share that he is honoured about Uri: The Surgical Strike being re-released in Maharashtra. He also thanked the state government for their support.

Uri: The Surgical Strike was a film based on the September 29, 2016 retaliation surgical strikes carried out by the Indian Army. The film also starred Yami Gautam, Paresh Rawal, Kirti Kulhari and Mohit Raina in key roles.