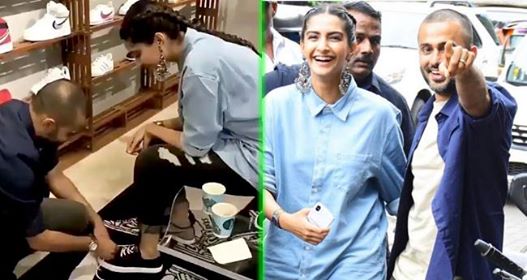 Sonam Kapoor Ahuja is the resident fashionista of Bollywood. With movies like Neerja, Veere Di Wedding and latest Sanju, she has proved that she is the perfect blend of beauty and skills.

The newlyweds – Sonam Kapoor and Anand Ahuja were spotted at the puja of Anand’s new store Veg Non-Veg in Mumbai. In one of the boomerang videos, while showing shoes to his customers, Anand Ahuja is seen going down on his knees to tie Sonam Kapoor shoelace.

This is not @bhanelove this is Ahuja’s love 💕 | #SonamKapoor #AnandAhuja

Sonam sported a long denim shirt with grey ripped jeans while she neatly braided her hair and wore heavy silver danglers to accessorize her look. the lady completed her look with a pair of trendy sneakers.

After the release of Veere Di Wedding, Sonam Kapoor flew to London to spend some time with husband, Anand Ahuja. At first, they were joined by Kareena Kapoor, Rhea Kapoor, Arjun Kapoor among others. Later their gang was joined by Karisma, Janhvi, Khushi and Anshula Kapoor.

Couple of the day! ✨ | #SonamKapoor #AnandAhuja

Recently in an interview, Sonam revealed how she fell in love with Anand Ahuja.

“Recalling my first date “I was apparently wearing the worst sneakers he had ever seen. I keep telling him that he fell in love with me despite my bad sneaker game… That day, walking and talking in London, I knew he was the love of my life,” she wrote on Instagram.

In June, a month-and-a-half after their wedding, the couple shared a few never-seen-before pictures from their wedding through VOGUE magazine.

The diva is enjoying the success of Veere Di Wedding and will be seen next in a film with father Anil Kapoor. Stay tuned to Laughing Colours for latest news and updates on Bollywood.