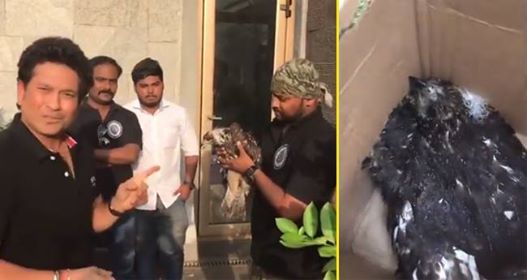 Sachin Tendulkar who is the ‘God of Cricket’ is a very famous sportsperson. Sachin who is also known as the master-blaster has not only performed well in the field of cricket. He is a good human in reality as well. He has recently saved a bird who was dying because of this hot climate.

He does a lot of humanitarian work. Whether it’s routing for the environment or doing charity, Sachin has always done good deeds. Even yesterday, he posted a video where he was seen feeding a dehydrated bird which landed on his balcony.

He even went on to say that the bird was attacked by crows which sickened it further. Not only did he feed the black kite with chicken and breadcrumbs, but also he called people from the NGO who specialize in treating animals. He made sure that the bird was fine and encouraged people to rescue the troubled animals. Tendulkar shared the video with a caption, “A good deed brightens a dark world. Always be up to lend a helping hand, be it to humans, birds or animals. Do your bit!”

Check out the video:

A good deed brightens a dark world. Always be up to lend a helping hand, be it to humans, birds or animals. Do your bit!

These days Tendulkar’s son Arjun has also been in the news for getting a call for the Sri Lankan series which is slated to happen in June. Like a proud father, Sachin expressed his happiness and said, “We are happy on Arjun being selected in India U-19 team. It is an important milestone in his cricketing life. Anjali (Tendulkar) and I will always support Arjun in his choices and pray for his success.” Arjun’s coach, Atul Gaikwad, said, “Arjun’s hard work has paid off. I’ve seen that boy very closely. From suffering back-to-back stress fractures three years ago to struggling with a spate of injuries, he has worked very hard to get here,” said Gaikwad. Having remodelled his action recently after suffering several injuries, Arjun can whip up good pace, the primary reason why the selectors opted for him. “On a good day, he can consistently touch 135 (kmph).”