Video Of A Dog & A Chicken Running Around & Playing Has Gone Viral On Twitter; Enjoy 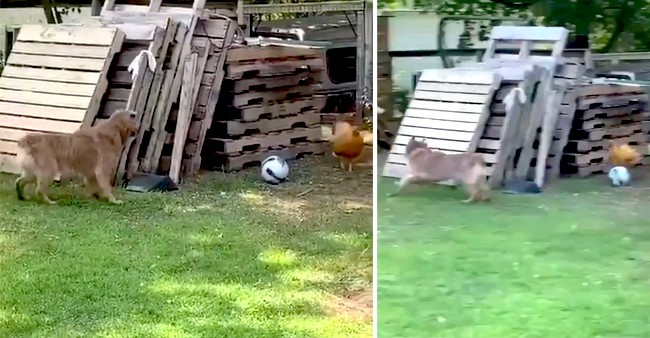 Animal videos are loved by many people. They like to watch wild animals as well as viral videos of pets. Whenever such a video appears on the social media, it takes no time to spread among netizens. Now, a video of a dog and a chicken is being enjoyed very much.

It can be said that the video is something different from nature’s rule. We always know that the stronger hits the weak. But the video shows us that anything may happen in this world. In the video, we can see a dog and a chicken. Naturally, the dog is stronger, but there is a twist.

Who you callin' chicken?!

Sometimes the chicken is getting tired and stopping, but the dog is very playful. It’s continuously pushing the chicken to play with him. In the 58 seconds video, both of them are whirling round and round around the wooden blocks.

People can’t stop laughing on the video that is spreading with a caption, “When chickens attxck” and a laughing emoji. While it is spreading via Twitter, it has got 125.7k likes within a few minutes after sharing.

A fan asks Sonu Sood to drop him to the Maldives, actor’s hilarious reply wins every heart...

Throwback to the time while Riteish Deshmukh’s break up prank with Genelia D’Souza went wrong...

Big B Seemed To Be In Comical Mood As He Shared A Throwback Pic With Katz; Called Actress ‘Devi G’...