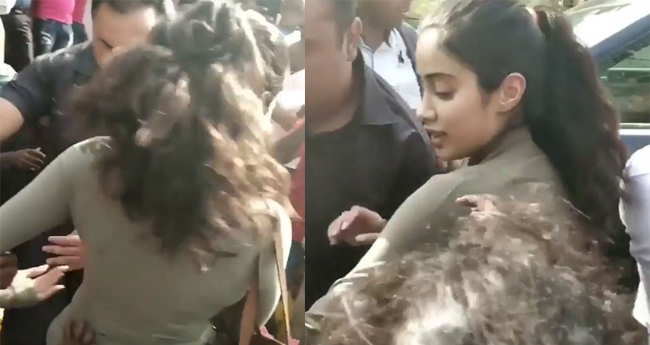 Getting an opportunity to debut with a star filmmaker is like a dream to every aspiring actress. Such opportunities to step in the town of B-town probably come easier to the kids of stars. In the row, Janhvi Kapoor, the daughter of filmmaker Boney Kapoor and late diva Sridevi Kapoor bagged her debut film of Karan Johar titled ‘Dhadak’.

Ever since she bagged the film, she became a popular face among everyone across and started being followed by many fans. Her video of talking about her late mother at the National Awards ceremony went viral so fast proving her popularity.

Check out the video here:

A few days back, when Janhvi was leaving an eatery, she was mobbed by children. Janhvi too felt happy seeing her fans and stopped to greet them and then, a kid touched her inappropriately. However, nobody was sure that whether it was intentional or unintentional. Janhvi tried hiding the unpleasant incident with her smile and left.

Recently, Sushmita Sen revealed a similar incident happened with her when a 15-year-old molested her at an awards show.