Pics: Kapoor gang Arjun, Kareena, Sonam and Rhea is enjoying lunch on the streets of London 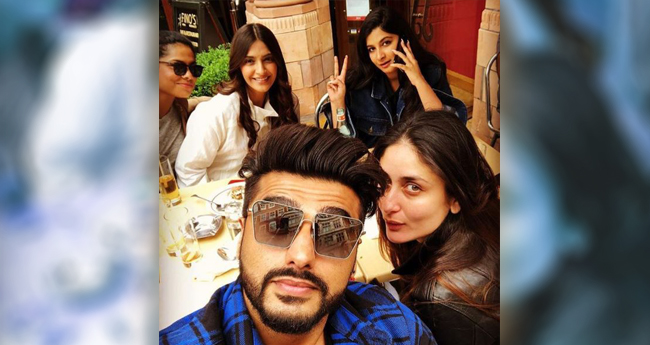 After the success of ‘Veere Di Wedding’ the actresses and filmmakers are seem to having a good time. Recently the current generation of ‘Kapoor’ families working in the film industry were spotted spending quality time together in London. Sonam Kapoor and Kareena Kapoor are on their annual vacation with hubbies ‘Anand Ahuja’ and ‘Saif Ali Khan’ in this city.

Arjun Kapoor too joined his cousins Rhea Kapoor and Sonam Kapoor and co-star from the movie ‘Ki & Ka’ ‘Kareena Kapoor Khan’. Leaving the diet behind they were eating pizza and Kareena’s expressions in the video clip are worth watching. Rhea recorded the video and she is saying ‘The Veeres take London’ and Arjun is saying ‘Mai apne mehenge chashme pehenke zara ek pose karunga’. Kareena calls ‘Pizza’ as her spirit salad.

Arjun Kapoor is in London for the shoot of the movie ‘Namastey England’ with Parineeti Chopra. He made some time to catch up with cousins. Arjun and Parineeti too were spotted having a good time on the streets of London. They are continuously sharing pictures from the sets of their upcoming film.

With Veere Di Wedding the Kapoor daughters have for-sure become good friends. Rhea Kapoor also became a stylist for Kareena for the movie promotions. Both Sonam and Kareena are known for their outspoken behaviour in media and they are becoming real-life veeres now.

Veere Di Wedding which was not a chic flick according to the filmmakers was based on lives of 4 childhood friends. The movie also portrays the life of modern day women breaking stereotypes. Kareena Kapoor Khan, Sonam Kapoor Ahuja, Swara Bhaskar and Shikha Talsania were roped to play ‘bffs’ in the movie co-produced by Rhea Kapoor, Ekta Kapoor and Nikhil Dwivedi. This movie has crossed 50 crores at the box office which is a good start for a women-centric movie in India.