Video: Kartik Aaryan Stepped Out Of His Car When He Saw A Young Fan Crying For A Selfie 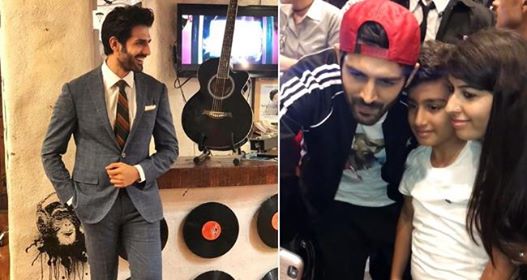 Kartik Aaryan has gained millions of fans after Pyar Ka Punchnama. The number has increased even more after his latest super hit film Sonu Ke Titu Ki Sweety. The film did wonders at the box-office and is among the top grossers of the year.

Some fans are so die-hard fans of him now that they become emotional when they see him. If they don’t get to meet him or take a selfie with him, they start to cry, purely for love on the star. One such fan started crying recently when he saw Kartik.

Kartik was recently going into his car after some event and was surrounded by lots of fans. After getting into his car, he saw a young fan crying and shouting his name. Kartik clearly moved by it, stopped his driver from moving ahead.

He got outside his car and asked the young fan to stop crying and agreed to take a selfie with the fan. Have a look at the video.

After he took few selfies with the kid, the kid stopped crying and he thanked Kartik for his kind gesture. After the video went viral, the star is being appreciated on the social media for breaking security protocol for his young fan and having a kind heart.

Kartik will next be seen in a rom-com film opposite Shraddha Kapoor. The film will be directed by Dear Zindagi, English Vinglish, Hindi Medium and 102 Not Out fame director Laxman Utekar. Any further details about the project are not known yet.