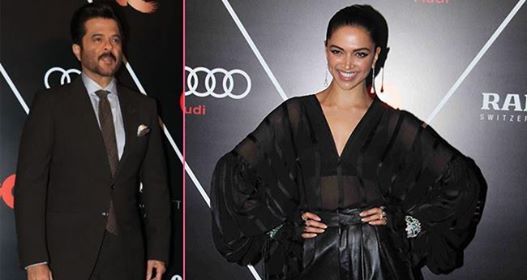 Deepika Padukone and Anil Kapoor shared a candid moment and this was captured by the cameraman present at the GQ 100 Best Dressed 2018. By looking at the video where they are seen having a conversation it seems like Deepika has confirmed her wedding rumours with boyfriend Ranveer Singh to Anil Kapoor.

Deepika Padukone and Ranveer Singh’s wedding rumours have been around for a long time now. Reports have even said that they might get married in November in Mumbai.

At GQ 100 Best Dressed 2018, Deepika slayed the red carpet in a black attire. She met Anil Kapoor, whose daughter Sonam Kapoor recently tied the knot with the love of her life Anand Ahuja.

how many of you know the full form of GQ?!(no cheating 😋) @gqindia @gq

Deepika and Anile.’s conversation as seen below in the video will also make you believe so. In the video, although the audio is not clear enough, it seems as if Anil is asking about Ranveer and if the wedding rumours are true to which Deepika blushes and shyly nods along before saying thank you.

Have a look at the video:

Once Deepika was asked if she would like to star in a movie with Ranveer which has a happy ending. To this, Deepika laughed and revealed, “I hope so. I really hope so. That’s actually what my family is always telling me. My sister especially and my mother, they are always like ‘do you have to die in every film?’ So yes, I hope that whatever film Ranveer and I do next, that we don’t end our lives in the way that we have and also maybe, a less emotionally draining film. Something just lighter on the heart and on the emotion part of it.”

On the other hand, when the same question was asked to Ranveer, he said, “Deepika is a wonderful artist and one of the best actors we ever had in Hindi cinema. I hope to collaborate with her in more films in the future.”