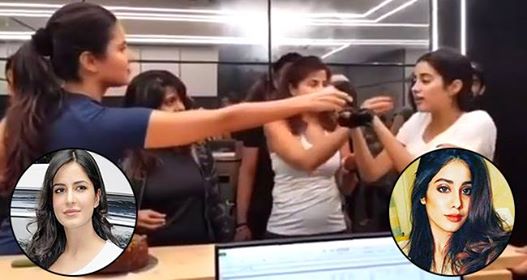 Everyone by now knows that Katrina Kaif and Jhanvi Kapor workout together. Maybe their gym time might not be the same. But they are often seen clashing with each other and having a play time together.

By now, it is clearly known to all that Katrina Kaif is a gym freak. She is a fitness freak and enjoys her workouts. She never skips it, no matter what. She has been working out at celebrity fitness trainer Yasmin Karachiwala’s gym. Katrina has been sharing her workout videos on social media. She often works out with Alia Bhatt. They bonded at the gym and have been friends since.

Show your love & support guys! Say something nice to my baby girl 💕 I want to make her smile :) @janhvikapoor [she commented]

There were reports doing rounds that two upcoming co-stars might be dating. This was confirmed by Ranbir Kapor during the trailer launch of ‘Sanju’. He said it is ‘too new’ to talk about.

Twist here comes when Katrina Kaif and Ranbir Kapoor were dating once. Now best friends Alia and Katrina dating the same man will obviously spark a fire between the two friends. Ranbir Kapoor and Alia Bhatt recently made their relationship public, with Ranbir accepting that they’re dating in an interview to GQ magazine.

Sridevi and Boney Kapoor’s daughter Janhvi Kapoor, who is gearing up for her Bollywood debut also works out at the same gym. She has been bonding with Katrina Kaif and in a video, Katrina shared on her Instagram story, we can see their warm camaraderie.

Have a look at the video:

During a staff member’s birthday celebration at the gym, Katrina can be seen sharing a laugh with Janhvi Kapoor.

In an earlier interview, Katrina was all praises for Janhvi Kapoor and had shared her excitement about her debut film, Dhadak.

Janhvi Kapoor will debut with the remake of the Marathi superhit film, Sairat with Ishaan Khatter. The film is slated to hit the theatres on July 20, 2018.
While Katrina has been busy with the shoot of Zero with Shah Rukh Khan and Anushka Sharma. And another film, with Aamir Khan Fatima Sana Shaikh and Amitabh Bachchan, called Thugs of Hindostan.