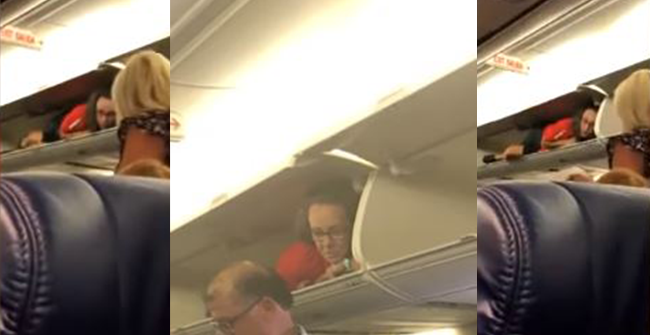 While we take flights, we get to see and meet different kinds of people.  Not so often, but rarely though, we come across some or the other bizarre incidents while flying in the sky.  We also get to see videos on different such incidents that took place on flights. However, this incident that we are going to talk about today will top the list for sure.  Read on to find out about the bizarre incident.

On Monday, on a Southwest flight travelling from Nashville to Atlanta, USA, a member of the cabin crew climbed in one of the overhead compartments and surprised the passengers. The passengers were confused on suddenly seeing the crew member on top of the cabin. The member was seen greeting the passengers boarding the flight as a surprise.

I can’t get over how weird I find this. @SouthwestAir please get it together pic.twitter.com/bEHkMMgGXU

Flight attendant climbs up the cabin to greet passengers

One of the passengers in the flight named Veronica Lloyd, captured the whole incident in her mobile and shared it online.  She took to her Twitter account to share the captured video of the flight attendant in the act and captioned it, “Is this a dream?”

In an interview to CNN, Lloyd said, “She was up there for about five minutes. More than half the flight was boarded before she got down. It was pretty hilarious.”

She added, “This was my second time ever flying with them. So I guess I was unaware of the [flight attendants] wanting to have a sense of humor during flights for Southwest, but it certainly was entertaining.”

Regarding this incident, Southwest Airlines released a statement in which it stated, how the employees of Southwest ‘are known for demonstrating their sense of humor and unique personalities.’ In this particular Incident, the flight attendant ‘attempted to have a brief moment of fun with customers during boarding.’

They also added, “Of course, this is not our normal procedure, and Southwest crews always maintain safety as their top priority.”