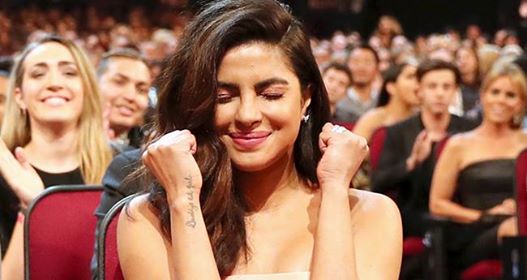 PeeCee is all set to make a comeback in Bollywood film. Her first comeback movie will be Bharat alongside Salman Khan and she seems to be super excited for the movie.

She was seen goofing around with the director of the film, Ali Abbas Zafar.

Check out the video:

Priyanka and Salman have earlier worked together in films like Mujhse Shaadi Karogi, God Tussi Great Ho and Salaam-E-Ishq.

Priyanka wrapped up the shoot of Quantico 3. She is also set to perform at IIFA 2018 which is going to be held in Bangkok this year. Priyanka will also be attending Meghan Markle and Prince Harry’s Royal Wedding.

“Just living is not enough… one must have sunshine, freedom and a little flower” -Hans Christian Anderson 🌸 What makes you feel alive?

On the other hand, Salman is gearing up for the release of his upcoming film Race 3. The movie is all set to hit the screens on June 15. He will also be seen hosting the game show Dus Ka Dum.